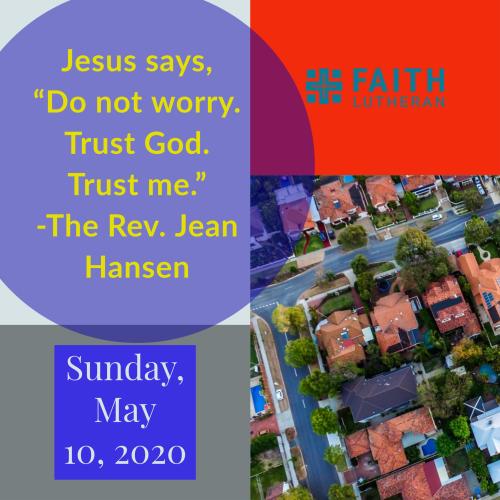 Imagine, if you will, a time like none other – a time when unexpected events are occurring, a time when it’s difficult to know whose truth is true, a time when the future – both tomorrow and weeks away – is filled with unknowns. Can you imagine such a time?

Now, what if, at such a moment, the advice you received was this: Do not worry. Trust God. Trust me. Would you feel more at peace?  It depends, I guess, on the severity of the situation and on who made those three statements.

Just such a situation is occurring in today’s Gospel lesson. Remember, this passage is from Jesus’ farewell discourse. Jesus knows that his death is near, so he is attempting to reassure his disciples. We read in John 13 that after he washed their feet and they shared a meal, Jesus foretold his betrayal by Judas and his denial by Peter. He then commanded his followers to love each other as he predicted his own departure.

Please note, all of this is taking place just before the crucifixion. So, I join some commentators in doubting that Jesus spoke with bravado. It is more likely that his voice was quiet but assuring. Perhaps there were tears. He may be telling them not to let their hearts be troubled, but the main reason he needed to say that was because trouble was all around. And, as the description of his time in the Garden of Gethsemane will prove, Jesus’ own heart was in turmoil. (1) Yet, Jesus reassures his followers, saying, “Do not let your hearts be troubled. Believe in God, believe also in me.”

Or, do not worry. Trust God. Trust me.

Pastor Ray Stedman offers yet another translation of the first verse of today’s Gospel reading: “You DO believe in God; believe also in me.” What Jesus means, he surmises, is that just as they have found relief for worry in the promises of God revealed in Jewish scripture, they can now find that same strength and help in Jesus. They have believed in and trusted God; now, they should believe in and trust Jesus. (2)

If they do, they’ll find it possible not to be troubled because, although Jesus is leaving them, he promises that there is a place for them in eternity (God’s house), that he will return to take them there, so that one day they will again be together.

Therefore, Jesus says, do not worry. Trust God. Trust me.

But, the disciples are still troubled; Thomas and Phillip speak up, seeming to say, “Jesus, you’ve been telling us to follow you, and we want to, but we don’t know where to go or how to get there; we need to see God more clearly to be assured we are on the right track.”

At this point, I imagine Jesus rolling his eyes in exasperation. Have they not been paying attention? To see Jesus is to see God; to know Jesus is to know God. They have seen the things Jesus has done, which, after all, are only possible because of God dwelling in him. Isn’t that proof enough?

You can imagine the disciples reflecting on what they’ve experienced during the past three years, on the astounds words and actions of Jesus. Perhaps, commentator Sarah Henrich writes, they are thinking, “What does all this say about Jesus? About the Father? Water to wine? Lazarus to life? A brown bag of bread and fish to a banquet? Healings? Works that bring healing delight, abundance, life itself. These would be the works of God, Father and Son.” (3)

So, Jesus commands, do not worry. Trust God. Trust Me.

We all know that’s not always that easy. In the most recent edition of Christian Century there was another one of those sections featuring reflections people had submitted on a single word. The last time I mentioned this, the word was “feet.” This time the word is “plate.” Plate? What worthwhile story could one have to share about a plate?

You would be surprised! Among the reflections was one by writer Frederick Buechner from his book Telling Secrets. Here it is: “I remember sitting parked by the roadside once, terrible depressed and afraid about my daughter’s illness and what was going on in our family, when out of nowhere a car came along down highway with a license plate that bore on it the one words out of all the words in the dictionary that I needed most to see exactly then. The word was TRUST.

“What do you call a moment like that? Something to laugh off as the kind of joke life plays on us every once in a while? The word of God? I am willing to believe that maybe it was something of both, but for me it was an epiphany.”

“The owner of the car turned out to be, as I’d suspected, a trust officer at a bank, and not long ago, having seen an account I wrote of the incident somewhere, he found out where I lived and one afternoon brought me the license plate itself, which sits propped up on a bookshelf in my house to this day. It is rusty around the edges and a little battered, and it is also as holy a relic as I have ever seen.” (4)

Do not worry. Trust God. Trust me.

I began by asking if you could imagine a time like none other – a time when unexpected events are occurring, a time when it’s difficult to know whose truth is true, a time when the future – both tomorrow and weeks away – is filled with unknowns. Most of us, I’m guessing, thought, “That time is now!” The fact is, though, that that description fits many times in our lives. It is constantly the reality, to greater or lesser degrees. That is probably why a friend of mine becomes annoyed when the term, “unprecedented time,” is used in reference to the world-wide pandemic. There have been such situations before now; although each era brings its own unique challenges.

It was a time of unexpected events, confusion, and unknowns for the followers of Jesus when their Lord was about to die; that also was true for Frederick Buechner when his daughter was ill, and his family was in turmoil, and it is true for us now.

And, so in those times, this time, the message from Jesus is the same: “Do not worry. Trust God. Trust me.” AMEN