“I Have Set You an Example…” 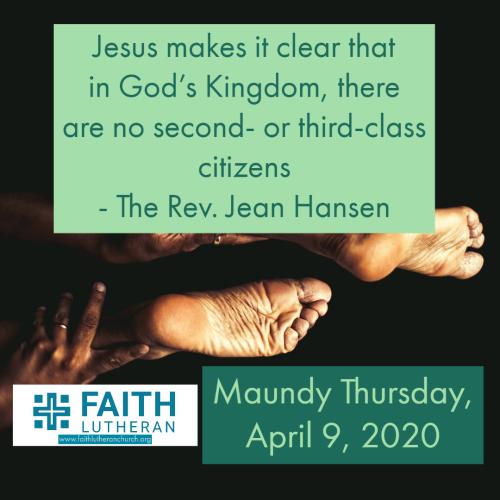 “I Have Set You an Example…”

A few months ago, the Christian Century magazine invited its readers to submit reflections on “feet.” Now, I thought that was odd, maybe because the last thing I want to do is reflect on my feet, which are getting uglier and less compliant by the moment. When the February 26 edition arrived, the cover had one descriptive word: “Feet,” and inside, there were 14 well-written reflections on feet.

I read them all and was surprised that the setting for one of them was, most likely, a place I have visited. Mona Penida wrote about walking the labyrinth on the grounds of a Benedictine sisters’ monastery in the Colorado Rockies. Now, I don’t imagine there’s more than one such place, so it’s probable that I was there in 2011 for more than a week, and I prayed while walking that very same labyrinth.

By the way, if you don’t know what a labyrinth is, it’s a maze-like design that is laid out on the ground. Following the path back and forth through the maze has a calming effect for many people and helps some focus on a thought or a prayer. However, when I did this walk each day, I did not take the step which Mona took. She walked the labyrinth barefooted because she was striving to understand what Sister Joan Chittister meant when she wrote: “a real monastic walks through life with a barefooted soul.”

I immediately knew, before reading any further, that Mona’s experience was not fun. That labyrinth was in a Ponderosa Pine forest and the needles and pinecones from the trees fell on the hard path, which also was covered with rocks of all sizes. Walking that path barefoot hurt, to put in bluntly, but Mona continued to walk and to pray. She considered stopping when she got to the center, to take the short-cut rather than walking the same path back out, but she pressed on, with little jumps and yelps as she kept moving.

Because I had been on that same path, her sacrifice seemed a bit extreme to me. I believed that it hurt – a lot - and wondered at the purpose. Mona writes that as she looked up at the tall pine trees, she prayed, “Please show me what it means to have a barefooted soul.”

It’s easy for us to be separated from the suffering of others, although these days we are, perhaps, more aware of it than is sometimes true. Jesus invites us into the world’s suffering with these words: “I give you a new commandment, that you love one another. Just as I have loved you, you also should love one another.” (John 13:34) And, he uses feet – washing feet – to make his point.

We’ve been doing a lot of handwashing, which does have sacrificial significance since it’s a way not to spread the Covid 19 virus. But, when Jesus takes on the task usually done by the lowest slave in the household and kneels to wash his disciples’ feet, he is illustrating what it means to follow him. Jesus is preparing his disciples for what lies ahead by washing their feet; he tells them doing so is an example, “that you also should do as I have done to you,” he says. (John 13:15)

Brother David Vryhof, in a Maundy Thursday sermon, said that as Jesus knelt at the feet of his followers, taking the place of the least and the lowliest, he flipped the pyramid of power. What’s that you might ask.

I’ll quote him: “At the top are the rich, the powerful, and the intelligent. They set the standards and enforce the rules. At the bottom are the weak, the poor, the powerless, the vulnerable: the immigrants and refugees, the unemployed and the destitute, the mentally ill and physically disabled, the uneducated and oppressed, the excluded and marginalized, those without power or voice.” Jesus, however, stoops to align himself with those at the bottom; those in the last place, the place of servants and slaves, Brother Vryhof writes. Jesus makes it clear that in God’s Kingdom, there are no second- or third-class citizens: every person is valued, every person is honored, every person is loved. (2)

With those beautiful but challenging words in mind, I want to close by telling you about a 5-year-old girl who lived them. Amy Frykholm writes in the most recent edition of the Christian Century about the scandal of foot washing and an Episcopal church where it is common practice. She tells how, one year on Maundy Thursday, a homeless man named Kenny came to the service. Even though he was still drinking heavily and died of liver failure shortly afterward, he attended church with a faithfulness that was no longer about his seeking help (from the congregation).

Kenny ended up sitting next to the priest’s “tiny sprite of a daughter,” Lara, creating some anxiety for Amy because the foot-washing occurred in a circle, and each person washed the feet of the next person if he or she was willing. So, would the little one refuse to wash Kenny’s feet, or would he refuse to have his feet washed, either of which could cause hurt feelings?

Now, I’ll read the rest in her own words: “But when it was Lara’s turn, she knelt as if it was the most natural thing in the world. She lifted Kenny’s feet into the basin of warm water, put soap on her hands, and washed his feet. Kenny laughed nervously and then began to cry. Then everyone began to cry, except Lara, who continued her work in a businesslike manner with deliberate movements.” (3) Her focus, her intention was on following Jesus.

“I have set you an example,” Jesus said, “that you also should do as I have done.” The “you” is us. Ouch … that’s not an easy path on which to walk. AMEN