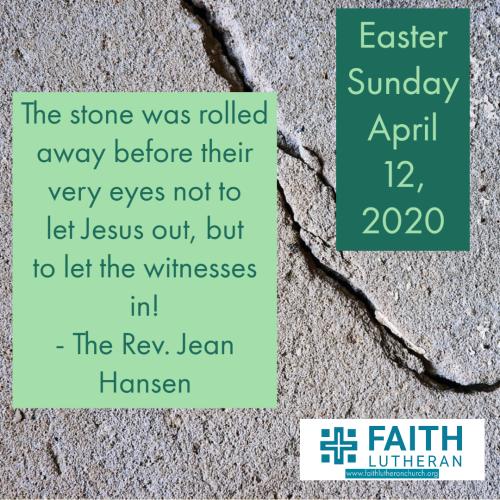 Years ago, more than 10, I’d say, I told a story on Easter morning of an event that had occurred earlier that week. I don’t think I’ve retold it since then, at least not on Easter Sunday, but I’m going to do so today.

On the day in question, I was reading the Easter story to a large preschool class. Actually, I was not so much reading it as telling it and showing the illustrations. I had told the children about Jesus’ death, which is not an easy thing to do in preschool terms, and how his body was placed in a tomb, showing them the illustration of a cave with a large, heavy stone rolled in front of the entrance. That, alone, could have spawned some interesting questions, so I did not pause to give them a chance to ask.

Instead, I enthusiastically turned the page to the picture of an angelic being, and excitedly explained that when Jesus’ friends came to the cave-like tomb and looked in, they discovered that his body was not there. And do you know why? Once again, I didn’t pause for a response, but went right on and proclaimed, “He was alive!”

At which point, I paused for a breath. It was then that a 4-year-old-going-on-14 girl sitting immediately to my right, looked up at me with an absolutely incredulous look on her face, and in an accusing tone, with hands-on her hips, said, “Pastor Jean, is this a true story?” (I wish I could hear you laughing from your homes.)

I noted then, as I do now, that we all have asked that question, even if only to ourselves. When I thought about that event in conjunction with Easter 2020, it seemed entirely possible that 20 years from now someone will tell the story of Easter during a pandemic, with abbreviated worship, no choir or brass players, virtual organ music, few flowers and a congregation at a distance, and say, “Is this a true story?”

Or, perhaps not, maybe by then live-stream worship will be the norm and in-person worship – like that which many of us are missing today – will be what’s hard to believe. I hope not, but the reality is this pandemic will change our lives. Whatever is the case, though, it will still be Easter, and Jesus will be resurrected from death to life, and those who recall Easter 2020 will remember it as a distinctive year.

It’s appropriate, then, that our Gospel this year is from Matthew, whose version of the resurrection story is distinctive in a number of ways. There’s only one angelic messenger, for example, and the first two people to hear the news of the resurrection are Mary Magdalene and “the other Mary,” who many scholars presume to be THE Mary, the mother of Jesus.

Probably, though, the most distinctive details are that in Matthew’s account, the women experience an earthquake and actually see that single angel descend, roll away the stone, and sit on it. The guards quake with fear and become like dead people. It’s soon obvious that the tomb is empty, which means that the stone was rolled away before their very eyes not to let Jesus out, but to let the witnesses in!

They are sent, then, to share the news and they go, with fear and great joy, and on the way encounter none other than the Risen Lord, Jesus, who reiterates the angel’s command to stop being afraid. After all, he’s alive; he’s present with them. Why should they be afraid? (1)

An earthquake and an angel perched on a rock seems like a good reason to be just a little scared, don’t you think? The world was literally rocked by the resurrection, and that would have been the case without the ground shaking, but the earthquake seemed to announce, “Pay attention!”

In an Easter sermon, Pastor William H. Willimon tells his earthquake story. He was preaching in Alaska, and during his sermon, the earth heaved for a moment that seemed like forever, he wrote. The little church shook, and one of the worshippers looked around and said, “How about that, the light fixtures didn’t fall this time.” Everyone seemed to expect him to continue, but he ended his sermon immediately, having been shaken by the earthquake, but also a bit shaken too by the nonchalant Alaskans. Afterward, during lunch (which still was held!), he asked the pastor, “What the heck would it take to get this congregation’s attention? I’d hate to have to preach to them every Sunday!” (1)

Normally, earthquakes do get people’s attention, and Matthew seems to be saying that Easter is an earthquake that shook the whole world, and that, like all such upheavals, is beyond our control.

We tend to think that Easter is about many things, including the full church, special music, and decorations we enjoy in worship, not to mention candy, new clothes, and festive dinners. But, when most of that is not possible, as is the case this year, we are reminded of the reality that Easter is about God.

Pastor Willimon says it so well, “…not God as an empathetic but ineffective good friend, or some inner experience, but God who creates a way when there is no way, a God who makes war on evil until evil is undone, a God who raises dead Jesus just to show us whose in charge here.” He continues, “On the cross the world did all it could to Jesus. At Easter, God did all God could to the world. And the earth shook…. God took the cruel cross and made it the means of triumph…. When the stone was rolled away, and the earth shook, we got our first glimpse of a new world, a world where death does not have the last word.” (2)

What message do we need to hear more than that at this present moment? The world is united in fear; the virus we are battling has changed our day-to-day lives.

There are many “perhaps” situations that plague us now. Yet, before this all began, during the difficult days, and after it’s over, the fact remains that Jesus is alive and is with us and for us. It is true, recent circumstances have gotten our attention, perhaps more than anything has in recent history, but first, the world was rocked by the resurrection, which put everything else in perspective, don’t you think? He is risen! He is risen indeed! Alleluia!