Living into the Vision 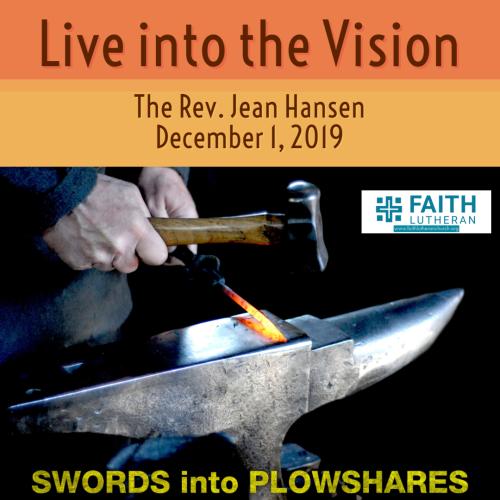 Living into the Vision

I’ve never been on Twitter. I’ve never sent or even read a tweet. I know such messages can have up to 140 characters, and a Twitter name is required, but that’s the extent of my knowledge. Obviously, like all things electronic, I could learn the process for tweeting, but do I really want to be introduced to tweeting? No, not really, the political, and thus divisive use of this communication tool has left a bitter taste in my mouth, making me doubt that it can be used in an uplifting way.

That’s why I chuckled when Lutheran pastor and commentator Barbara Lundblad jokingly noted an “early reference to tweeting” in today’s reading from Isaiah 2, where it says: “The word that Isaiah, son of Amoz, saw concerning Judah and Jerusalem.” We would have written “heard” not “saw” in that sentence. How does one see a word? Is this a Biblical tweet with way too many characters? Well, no, but the use of the word “saw” points to the vividness of the message.

In chapter 1, Prophet Isaiah described in detail the rebellion of God’s people, Israel, the violence, bribery, unfaithfulness, desolation, and mistreatment of the poor. At times there are glimmers of hope as God calls for repentance, but it’s overwhelmed by the people’s iniquity. Then, in Chapter 2, God is starting over, and Isaiah sees the word of the Lord, images of better days, a new reality.

Old Testament scholar John Holbert points out that the Hebrew verb “to envision” implies a new way of seeing. Rather than thinking of this as some future time, he writes, it is helpful to imagine that this as a vision was always available to those whose eyes have been opened to the newer reality of God. (1)

God and all that God represents is in the center of the universe, on THE high spot (described as the Temple in Jerusalem). People of every nation, even the enemies of Israel and Judah, are streaming to the mountain, that is, to God. Why? So that they can hear and be transformed by God’s teaching of God’s ways. God is judge and arbitrates between the people for a particular purpose: so that they exchange implements of war for implements to feed people, and waging war is no longer an “art” to be perfected.

This is a vision to which ancient Israel is called, but also us. And, remember, visions are not just future hopes and dreams, but present potential realities. It is what we live into.

Did you know that Isaiah’s words are carved into the wall across from the United Nations’ building? “They shall beat their swords into plowshares, and their spears into pruning hooks; nation shall not lift up sword against nation, neither shall they learn war any more.”

Who can believe that’s possible when recently, in Syria, Kurds were attacked by Turkey, and in Yemen, after four years of war and a Saudi-led siege, almost 16 million Yemenis face “severe acute food insecurity”?

And, if Yemen is the world’s worst humanitarian disaster, Afghanistan suffers its deadliest fighting. In 2018, by one tally, the war killed more than 40,000 combatants and civilians. And that’s just one year of an 18-year-long conflict. In African countries war thrives – Nigeria and South Sudan, where 400,000 people have died and Cameroon, where civil war is a very real possibility.

In Venezuela, civil and economic implosion are in process. We all have heard more about Ukraine recently where war continues to smolder, sparked by Russia’s 2014 annexation of Crimea.

So far this year, 35,500 people have died in the United States due to gun violence, including nearly 200 children and 700 teens.

In the midst of all that, writes Pastor Lundblad, Isaiah’s vision still speaks to us, longing to shape the days in which we are living. And so, she asks, can you see the vision in the Christian and Muslim women who, a few years ago, dressed in white and laid on their stomachs near the main highway in Monrovia, Liberia, where everyone could see them? They embarrassed the President, Charles Taylor, who finally agreed to attend peace talks in Ghana.

And, you can see the vision in the children carrying signs near the U.S. Capital proclaiming, “Protect Children, Not Guns,” and in the way, the Children’s Defense Fund refuses to be quiet about gun violence. Guns can be turned into plowshares, they believe, by being turned in at the local police station. (2)

How we respond to Isaiah’s vision, how we remain faithful until Jesus returns, is significant. The brokenness of our world matters and is ours to repair, by the power of the Holy Spirit. Listen to this story told by Dr. Bill Muehl, who was the professor of preaching at Yale Divinity School, and then was reflected on by the Rev. Dr. Stephen Montgomery.

Dr. Muehl describes a child in preschool who had made a ceramic figure to be taken home as a gift for his parents on the last day of class before Christmas. When the child sees his parents in the hallway, he runs toward them and accidentally falls. The ceramic figure crashes to the ground and shatters into a hundred tiny pieces.

The father takes the sobbing and frightened child into his arms and attempts to console his son with a disclaimer, “Don’t cry, it doesn’t matter.” But the child’s mother, wiser in such things, intervenes, “Oh, no, she says, “It does matter,” and she cried with her son.

“On this first Sunday in Advent,” says Pastor Montgomery, “the prophet Isaiah is trying to tell us that God has set a beautiful vision before us, but life is short, and along the way to that vision we have broken some things. Sometimes we did in intentionally, and sometimes we did not. Some relationships have been broken, responsibilities messed up. And the brokenness is at all levels … in our families, our church, our communities, our nations and the world. And it matters.” (3)

Indeed, it matters. Therefore, may we respond to Isaiah’s prophecy in ways that make the vision more and more real. Perhaps even tweet it? “They shall beat their swords into plowshares and their spears into pruning hooks; nation shall not lift up sword against nation, and, neither shall they learn war anymore.” May we walk in the light of the Lord. AMEN