All Is Not Lost! 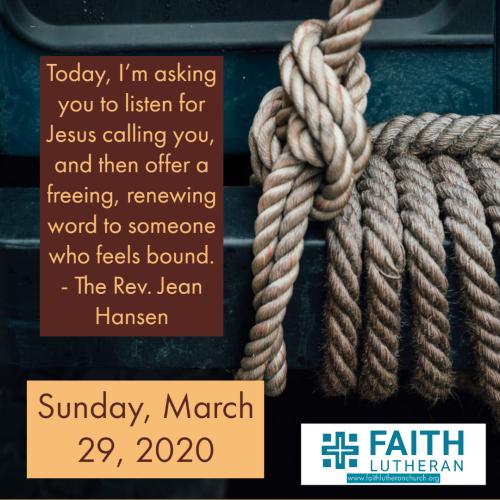 All Is Not Lost!

Sermon 3-29-2020
Fifth Sunday in Lent
Text: John 11:1-45
Pastor Jean M. Hansen
Here we are, my friends, in the midst of a “Stay at Home” order by the State of Ohio. And, so, most of you are at home, while just a few of us are here. We are carefully keeping our physical distance to provide spiritual food for the Faith Lutheran Church family and friends. I am thankful for the commitment of David and Melissa Johnson, Gabe Hyter, Geoff Whidden, and the Dowling-Antal family for their support of our live-streaming efforts. It would not be happening without them.

As Governor DeWine has reminded us often this week. We all have the same goal in the midst of this Coronavirus pandemic – to save lives, to prepare for the wave of illness that could arrive among us, and reduce it so that our health care system is not overwhelmed. We all are asked to do what we can now so that the pandemic fades as soon as possible. Thank you for the part you are playing to make that happen.

It’s the fifth and final Sunday of Lent, which hardly seems possible. We once again have read a long Gospel lesson, giving you enough time to refill your coffee cup before the sermon. (Don’t get too accustomed to that!) Last week’s story of the man born blind had some humorous and profound moments; today’s features the amazing surprise ending that so perfectly illustrates the astounding, unconditional love of God, which has been our theme these four weeks.

Jesus is friends with the family featured in today’s Gospel lesson – siblings Mary, Martha, and Lazarus. We are told He loves them. So, it’s disconcerting that when word reaches Jesus that Lazarus is ill, and his presence is required, he “tarries.” That’s an old word; most versions translate the Greek as “remained” or “stayed,” but Dr. David Lose writes that he thinks “tarried” is closer to reality. Jesus wasn’t just held up, he intentionally waited, delayed, dragged his feet. The reason was that he was anticipating the glory of God being revealed. He wanted to make sure that the stage was set.

He tarried so that when he arrived, Lazarus had been in the tomb four days, which was meaningful because, according to Jewish tradition, the deceased person’s spirit stayed close for three days. By day four, it had left.

Jesus’ tarrying may have had a holy purpose, but it resulted in confusion and pain. Both Mary and Martha express their dismay in a half-rebuke, “Lord, if you had been here, my brother would not have died.” No doubt, we too have felt that way, and those words have been echoed in our lives. “God, where are you?” “God, why didn’t you prevent this?” “God, why did this happen?” (1)

The thing is, that in this story, and our lives, Jesus sees beyond death. For those at Lazarus’ home, especially Mary and Martha, the assumption was that all was lost. But, writes commentator Melinda Quivik, “even when everything about Lazarus’ death makes it impossible for his sisters and the gathered friends to imagine he could walk out of the tomb, when Jesus calls him, he comes.” That’s because restoring life is in God’s, not the human realm.

And, did you notice, neither Lazarus nor anyone present is said to believe in Jesus’ power? “Just the opposite is the case; the crowd does not expect the dead man to emerge when the stone is rolled away. The people assume that death is final, irrevocable, and there is no remedy for it.” (2) People’s belief is not the source of Jesus’ ability to bring Lazarus from death to life.

Now, it’s true that Martha responded positively, but vaguely, to Jesus’ announcement, “I am the resurrection and the life. Those who believe in me, even though they die, will live. And, everyone who lives and believes in me will never die. Do you believe this?” (vs. 25-26) When she responded, “Yes, Lord, I believe that you are the Messiah, the Son of God, the one coming into the world,” I doubt it occurred to her that her brother would leave the tomb alive, nor did she realize that Jesus was referring to the ultimate cure for death.

Lazarus’ resuscitation (not resurrection, because he will die again) was a flash of God’s glory. A foretaste of Jesus’ resurrection. It’s described by theologian, Wolfhart Pannenberg, in this way: “What happened on Easter was the future breaking into our collective past. The new life Jesus brought was quite literally our future taking place at a distant moment in history.” (3) In other words, we can believe that we too will rise again one day because, in Jesus, it already happened. Nothing can prevent the eternal life that Jesus offered us because it has already come. Jesus is the resurrection and the life.

When Lazarus shuffled out of that tomb, and Jesus said, “Unbind him, and let him go,” it was a glimpse of what would be; we all are set free from the prison of death because of the astounding, unconditional love of God. That’s the great good news for this time and place.

But there’s more; when we feel the need to be unbound, set free, released – which we may be feeling right about now after all these days at home, hearing dismal news – Jesus calls to us, as he did to Lazarus, reminding us what’s possible. Then, Jesus uses us – our work, our relationships, our attitudes, our faith – to free others.

Several times this week, I spoke with church members who are in various long-term care facilities; more than once, I heard these words, “I feel like I’m in prison.” (Except that in prison, most people can have visitors and eat their meals with others. That’s not the case for these elders now.) What word of hope can, those who are less confined? Either due to technology or their life situation, bring to them?

There are people all around us who feel trapped in the midst of this pandemic. Due to financial stress or decisions that have been made for them. How can our actions, even as we face limitations ourselves, create a way out?

That’s what I’m asking you to ponder and act on this week. Please share your experiences and ideas with me. If you want, you can do so on your device right now. As we look toward a Palm Sunday, which will be different than we have ever experienced, remember that even when it feels as if all is lost, it’s not, when Jesus is with us (which he is). AMEN