Who Knew Stewardship Could Be So Much Fun? Part #2 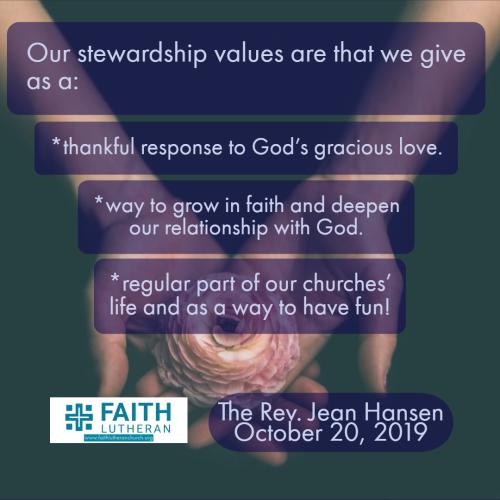 Who Knew Stewardship Could Be So Much Fun? Part #2

Who Knew Stewardship Could be Fun?

If you’ve been here during October, you know that one of the many focuses this month has been on making stewardship fun. Or, perhaps I should say the emphasis has been on transforming our view of the annual stewardship emphasis from something we tolerate to something we enjoy. As a reminder, stewardship is how we use and care for the gifts of God, which is everything, and, more particularly, how we share our time, abilities and money to further the ministry of Jesus in the church, in this church, in the world, and in our immediate community. So, this year we wanted to add to our already established stewardship values which are that we give:

As a thankful response to God’s gracious love…

As a regular part of our churches’ life and as a way to have fun!

So…to honor that last value…let’s pause for a moment for a joke that was told this year during the final worship service of the season at the Chautauqua Institution. The pastor asked this question, “What is your heart’s desire?” Then he told a story about a couple who were celebrating their 40th wedding anniversary and, at age 60, looking forward to retirement. They were given the proverbial brass oil lamp as a gift, complete with a Genie who promised to grant each on his or her hearts’ desire.

The woman wished for an around-the-world trip for two, with first-class accommodations, tours, transportation, and meals, all arranged and planned by a top-notch professional. POOF! Just like that, all the itineraries and tickets were in her hands, and her bags were packed. Then it was her husband’s turn. Much to his wife’s dismay, he wished for a companion 30 years younger than himself. POOF! Just like that his wish was granted, and he was 90-years-old!

It’s a familiar story to many of us, Jesus is teaching in the cities and villages of Galilee, accompanied by the 12 disciples, three women who are named – Mary Magdalene, Joanna and Susanna - and many others, who are providing for the men out of their resources. When a great crowd gathers, Jesus tells them the Parable of the Sower.

In his story, the sower, or farmer, is the one who plants the seed; that’s God or the one God commissions to do the planting (a surrogate?). The seed is God’s word and will. The soil is the one who receives the seed; it’s the condition of one’s heart. Jesus describes four options for the soil, with the underlying question for the listener being, “Which one are you?”

One of the commentators I was reading this week pointed out that the good soil has a lot in common with the other soils. The seed is the same and is scattered in the same way; the initial excitement at receiving the seed is the same; difficulties come to the good soil, as well as distractions. So, what’s different? It is that the roots go deep … the roots of God’s word and will go deep. (1)

That’s possible because the soil is prepared – the hard ground has been plowed and broken up, weeds have been removed, the seed has been planted and watered and fertilized. The soil has been made ready to bear fruit. And, please note, the soil does not do this itself, but the Sower/Farmer (or the surrogate sower/farmer) does it. There are a number of people here – those who cultivate the church’s community garden – who can testify to the effort that goes into preparing the soil so that there is a bountiful harvest. It’s an intentional, time-consuming enterprise.

That’s also true of the soil of our hearts; the difference, though, between the soil of our hearts and that in a vegetable garden is that, eventually, we can make choices about whether or not to allow the Sower/sower to prepare us to bear fruit, to be a part of the on-going preparation process that leads to the harvest.

The other important point is that we are both the soil and a sower; we are commissioned by THE Sower to plant the seed – God’s word and will – in this world and do what we can to nurture its growth.

Here’s an easy-to-understand example of that: as Maddy and Mikey are baptized today, all of us are promising to be farmers in their lives; to nurture the seed of faith that has been planted in them, so that the harvest of trusting God, of proclaiming Jesus through word and deed, of caring for others and God’s world and of working for justice and peace will be abundant in their lives. One day they will decide whether to allow the Sower to continue preparing them to bear fruit, but for now their parents, sponsors, and all of us are the cultivators in their lives.

It’s a reminder that we reap what we sow. I read a sermon this week in which the pastor described his church’s “watermelon fellowship,” during which there was a seed spitting contest. (This was in Alabama.) Well, a few seeds settled into some good soil between a brick wall and driveway, and before long there was a watermelon patch which they allowed to grow, watered, and perhaps even fertilized. A few months later the event was repeated with watermelons that had been harvested from that patch. As the pastor noted, when it was time for the harvest, they didn’t find cantaloupes or tomatoes on the vines; a watermelon plant produces watermelons. (2)

In the same way, a spiritual harvest is what comes from nurturing the seed of faith. And, one of the spiritual harvests that comes from good soil is cheerful giving. It’s giving that is excited to see what else will grow; to see the harvest of Jesus’ ministry in this congregation and beyond because we are good stewards of the time, abilities, and money that God has given us.

God loves a cheerful giver, and my prayer is that that’s how we all will feel as we turn in our Estimate of Giving cards on this Commitment Sunday. May our smiles will be genuine and our hearts full as we offer our cheer, “7, 6, 5, 4, 3, 2, 1 … Who knew stewardship could be fun?” AMEN