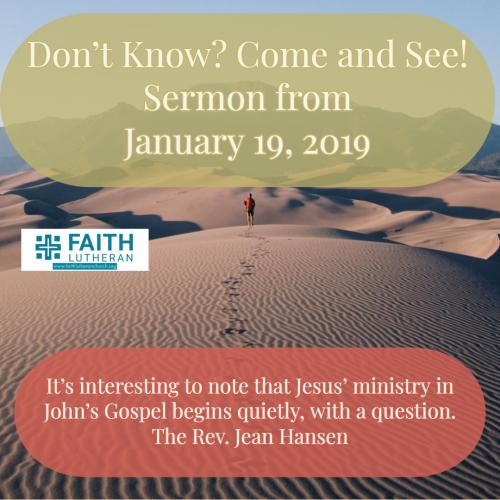 You probably have to be of a “certain age” to know the song I’m about to quote. It was the “class song” when I graduated from high school, which I’ve always thought was somewhat silly. The first lines are: “Do you know where you're going to? Do you like the things that life is showing you? Where are you going to? Do you know?”

Who recognizes it? It’s the theme song from the movie “Mahogany,” sung by Diana Ross. I suppose we picked it because not many of us knew where we were “going to,” and least not beyond the next few years. That’s not an unusual dilemma; the human struggle of all times and places has included questioning “which way?” or “now what?”. Or, as Jesus asks in today’s Gospel lesson, “What are you looking for?”

That’s a question to which we’ll return, but first, let’s get a sense of what’s happening in John 1. If we back up 10 verses and begin with verse 19, the story occurs over three consecutive days. (The fourth day begins at vs. 43, which we didn’t read.) On day one, John the Baptist declared that he is not the Messiah, the Light, and that one who is coming; the thong of whose sandal he is not worthy to untie.

On day two, he witnessed positively to the Light, testifying that Jesus is the one on whom the Spirit descended, like a dove, and is, therefore, the Son of God. And, on the third day, people begin to believe through John’s witness.

Through his entire ministry, John’s message is: “It’s not about me, it’s about Jesus.” And so, as the Baptizer is standing around with two of his disciples, one of whom was Andrew, it seems as if he passes them off to Jesus who then asks, “What are you looking for?” Or, as some scholars claim, a better translation of the Greek, “What are you seeking?”

It’s interesting to note that Jesus’ ministry in John’s Gospel begins quietly, with a question, while in the other Gospels, there’s more activity. In Mark, there’s a command to silence a demon; in Matthew, there’s a sermon to a large crowd gathered on a mountain; in Luke, the prophet Isaiah is quoted to proclaim that Jesus is the anointed one. But in John’s Gospel, it’s a subdued scene with a question worth asking, “What are you seeking?” Perhaps Jesus wanted to know, “What motivates you? What do you need? What matters in your life?”

And, did you notice that Andrew and his friend answer Jesus’ question in a question? “Where are you staying?” More than one commentator surmises that they weren’t asking for Jesus’ address, but something more like: “Where can we find you?” Where can we go to be with you to receive what you have to offer?” Jesus’ response is filled with an invitation, “Come and see!”

That phrase, “Lamb of God,” is so familiar to us, and yet, John 1 is the only place in the entire Bible where it is used. It’s not in the Old Testament in reference to God’s Messiah and nowhere in the New Testament is that exact phrase repeated. (2)

So, there’s an on-going scholarly debate about why John the Baptist called Jesus the “Lamb of God” (or why that description of Jesus was attributed to him). It certainly was NOT a common way to refer to the promised Messiah. Lambs were symbols of meekness, vulnerability. Or, they were an animal sacrificed as a means of forgiveness/salvation. (Remember the Old Testament account of the Israelites being saved from the plague of death by the lamb’s blood that marked their homes, an event that is remembered by our Jewish friends at Passover?)

In any case, it’s odd that John the Baptist called Jesus the “Lamb of God,” and it’s odd that his doing so seemed to encourage his own disciples to follow Jesus. And, I suppose, that “oddness” is the point; this Messiah, Jesus, is not who they expect. A Messiah who is meek, who is humble, who sacrifices self for the sake of others, is not what they anticipate. That’s why his first followers are invited to come and see who he is and what he’s about!

That’s exactly the focus of this Epiphany season; to be introduced to Jesus; to realize that he is the manifestation of God; to grow close to him as his disciples, so that we can become Jesus in the world.

There’s an article in the January edition of “Living Lutheran” that is titled “Being Jesus.” It describes how St. Matthew Lutheran Church in North Hollywood, California began a few years ago to pass out sandwiches to food-insecure people at a nearby park. That effort has grown into a wide-ranging, multi-faceted, community assistance program. (Similar to DLM, which we support at Holy Trinity, although more focused on placing people in jobs and homes, as is the case with the local Family Promise, which we also support.)

I won’t describe all the details of this impressive effort, but I’ll note two “attitudes” that made it happen. According to Pastor Stephanie Jaeger, one essential aspect is the church (as in, the people who are the church) claiming power and voice in the public square.  In other words, we Christians are empowered to transform a hurting world, and we should not hesitate to step out in faith, even in (especially in?) a secular environment. What a great thing it is to be motivated by our faith, and for that to be made known! And, second, says Pastor Jaeger, it’s vital that we are not just talking about Jesus, but are being Jesus. (3)

For that to happen, we must answer Jesus’ question, “What are you seeking?” Then consider what matters to us, what we and the world needs, and what motivates us.  We must be willing to come and see who Jesus is, what his will is for us, and invite others to do so too. Our lives can be shaped by two powerful words – “COME” to Jesus and “SEE” how he will work through us. AMEN