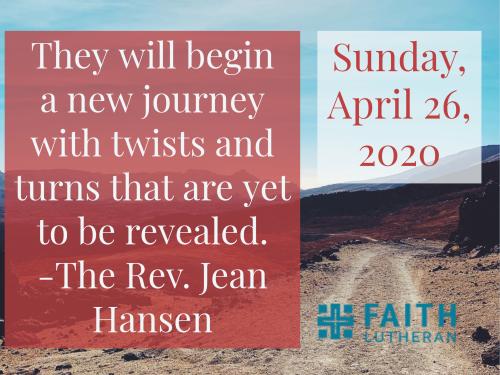 (Before beginning, encourage listeners to have paper and pen close by, to jot down their responses to some questions we’ll be pausing to ponder today.)

It is still the day we call Easter Sunday in today’s Gospel lesson, and what a day it has been! In Luke’s version of that day’s events, at least five women came to the tomb where Jesus’ body was put to rest on Friday. They encounter angelic beings who explain the lack of a body with these words: “Why do you seek the living among the dead? He is not here but has risen. Remember how he told you, while he was still in Galilee, that the Son of man must be handed over to sinners, and be crucified, and on the third day rise again.” (Luke 24:5-7) The women reported what they had witnessed to Jesus’ disciples (the 11) who view it as an idle tale. But Peter checks out the tomb, finds it containing only linen wrappings and departs amazed. That is Act One.

We jumped ahead Act Three last week; it’s the evening of that same Sunday, and the followers of Jesus are hiding behind locked doors, when Jesus appears among them, shows them his wounds, proclaims peace to them, and they rejoice.

In-between those two events, Act Two occurs; today’s story, which more than one commentator describes as our story. We are introduced to two disciples of Jesus, they were not among the 12, but a part of the “outer circle” of Jesus’ followers. Having been in Jerusalem for the Passover, on this Sunday morning, overwhelmed by disappointment, they are leaving to walk the seven miles to Emmaus.

Commentator Sarah Henrich surmises that their hopelessness stems from the fact that it is now the third day since Jesus died, and, as far as they know, he has not fulfilled his prophecy about being resurrected on the third day. (Although … there was the report of the women, and the empty tomb … what does that mean, they wonder.) They had not seen Jesus, nor had anyone they knew. So…even though they had hoped that Jesus was the Messiah, the time had come to stop hoping. (1)

Let’s pause right here and consider the situation. What we have here is people on the road, returning to where they do not want to be, saddened that their hopes have not been fulfilled. We, too, no doubt, have experienced times on life’s road when expectations have been unmet. Like these disciples, we trust Jesus too, yet we face disappointment and sadness. When has that been true for you?

As Act Two continues, Cleopas and his friend are joined by a stranger who walks along with them in their journey. He listens as they share their disappointment and confusion and then gives meaning and significance to that which they do not understand. When it is time for them to part, they insistent in offering hospitality to one whom they believe is a stranger.

Oddly, since it’s not his home, Jesus becomes the host as they sit down to eat; he takes the bread, blesses it, and shares it. I like the way commentator Eric Barreto describes what happens next. He says that when Jesus does this, it is the most Jesus thing of all, and everything changes.

What is the most Jesus thing of all in the Gospel of Luke? It is sharing a meal, which is significant because of the people gathered around the table – the sinners, the tax collectors, the poor, and unimportant people. But Jesus also dines with many powerful people who both question and marvel at his dining companion choices; he eats with the wrong people! In this story, it is not his presence or his teaching that identifies him. In feeding them, Jesus opens their eyes. (2) Did they even realize that their eyes were closed until that moment?

Let’s pause again to ask a few questions of ourselves. When have our eyes been closed to recognizing Jesus as he journeys with us? When have we been hungry, not just physically, but spiritually and emotionally?

Episcopalian Priest Michael Marsh points out that we are by nature hungry. “We hunger for life, love, wholeness, community, meaning, purpose. (In today’s reading) that hunger is surly the reason they strongly urged Jesus, ‘Stay with us.’” (3)

So, given the many ways we hunger, when has Jesus fed us – not just with the bread and wine of Holy Communion – but with peace, with faith, with hope, with insight, with grace, all of which comes to us through a multitude of means?

Jesus fed the Emmaus road travelers with not just bread, but with himself, writes Father Marsh: “with his body, his life, his love, his compassion, his strength, his forgiveness, his hope, with all that he is and all that he has. Their life was being restored….” (4)

Jesus has revealed himself as the one they expected him to be, after all, although the full meaning of that is yet to be grasped. We pause again to reflect: What do we expect of Jesus, the one who journeys with us on this road of life? Sometimes, I think it is too little; other times, our expectations are misdirected or self-centered, and often we fail to see him when he is right beside us. And, he often surprises us, doing not what we expect, but something more.

And so, we come to the end of Act Two. Cleopas and the other disciple, race back to Jerusalem; seven miles was never traversed so quickly. They find the followers of Jesus behind those locked doors and share their experience of hope restored. Now they will begin a new journey with twists and turns that are yet to be revealed, but with the assurance that the Risen Lord is walking with them.

Let’s pause one last time to ask ourselves, can this story of disillusion, questioning, hunger, revelation, being fed, empowerment and restoration be ours’ too? The answer is “yes”, over and over and over again. AMEN