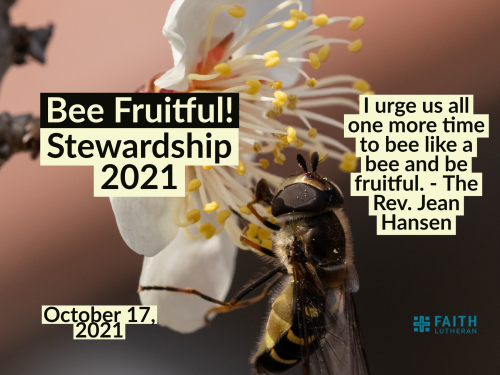 Sermon 10-17-2021
21st Sunday after Pentecost
Commitment Sunday
Text: Matthew 6:19-21
Pastor Jean M. Hansen
I enjoy watching the Antiques Road Show on PBS, although it is often rerun from years past. People bring their treasures to be appraised, and their reactions are interesting. You can always tell when they were expecting that Great-Great-Grandma's thimble would be worth more than the expert's assessment. But even more entertaining is those who are shocked to learn that the blanket that has been draped over a chair in the living room for decades is worth hundreds of thousands of dollars.

A couple weeks ago, the story was retold of a woman who brought in a table she purchased at a garage sale for $25. It turned out to be a unique example of early American furniture, which she later sold at Sotheby's Auction House for nearly $500,000. Can you imagine? While watching it, I thought it's a good thing she didn't set her Coke bottle down on it without a coaster.

Last Monday, the show included a woman who brought a lovely china multi-piece hot chocolate set that had a mark that designated it as being particularly valuable. It turned out that the mark was a forgery – bummer – but luckily, the set was still worth thousands because of its high quality and good condition. I like china and have more than my share of it, but I could not help but think that such a treasure probably spends its days packed away somewhere. Who would even display it if there was a chance it could be chipped or broken?

That intensifies the meaning, I think because treasuring something implies valuing or cherishing it and involves an emotional attachment. In the first century, treasures might have included very ordinary things like clothing and food, as well as precious metal and other valuable items. For us, treasures include savings accounts, pensions and IRA's, real estate, vehicles, expensive "toys," valuable antiques, and collections; the list could go on and on. To be honest, it is difficult not to treasure such things; their value as that which creates happiness, peace of mind, and security seems very real and is constantly praised.

Yet, it seems Jesus uses the word treasure to remind us how often we misplace our emotional attachment and give value to that which does not deserve it. For one thing, that which we often treasure is temporary; it can be stolen, damaged, devalued, used up, and eventually passed on to someone else.

Jesus punctuates his point with 10 words: "Where your treasure is, there your heart will be also." To put it simply, our hearts follow our treasure. So, if our treasure is money or possessions, then we spend it is what becomes important to us. If a lot of our money goes into a home, that place becomes a priority. If it goes into recreation, that activity becomes a priority. If it supports the college from which we graduated, then that's where our hearts are drawn.

We might respond to this by saying, "Naturally, that's the case," and leave it at that. But we who are followers of Jesus cannot (or should not) ignore the fact that Jesus said, "Do not treasure for yourself treasure on earth … but treasure for yourself treasures in heaven." In other words, that which we treasure – that which we cherish, that which has special value, that which we trust as a source of positive feelings and a sense of security – should be God and the gifts of God. This treasure – which includes God's grace, mercy, forgiveness, guidance, strength, the promise of eternal life - cannot be taken from us, or lost, or ruined or broken.

As we consider today's passage and others like it in scripture, we may be inclined to think that God is expecting too much of us. It's challenging not to place too much value on that which appears so valuable. Actually, though, Jesus' words reflect God's love for us and God's desire that we do not waste our time, energy, and resources trusting that which in the end will fail us. Instead, when we direct our earthly treasures in God's direction, the more God and the things of God will become our life's focus.

Here's another way to think about this. Among the things of God, we should treasure is the Fruit of the Spirit we have been talking about for three weeks. The Spirit empowers us to produce love and joy, act with peace and patience, show kindness, gentleness and self-control, and be faithful and generous. So, it only stands to reason that if the fruit of the Spirit is among that which we treasure, then our hearts will follow.

For example, if we say that the fruit of generosity is something we value (treasure) or the fruit of being joyful is a source of happiness (a treasure). So we strive to be generous and joyful, then our hearts will follow.  That means we and the way we live, including how we use our earthly treasures like time, talents and money, will be transformed to reflect what we most cherish.

That is what it means to be a fruitful follower of Jesus. And, so, I urge us all one more time to bee like a bee and be fruitful. AMEN