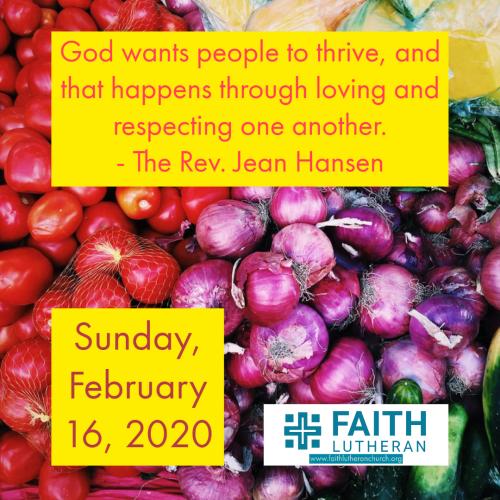 Well…I could just say “Amen” and sit down, letting Jesus’ Sermon on the Mount seep into our hearts, minds and souls. I’m guessing if we all sat quietly for the 15-20 minutes I usually preach and force ourselves to focus on what was just read, some discomfort would result. You may be hoping, and me right along with you, that some analysis of the Gospel will make it more … well, more palatable, less disconcerting.

In some ways, that may be true, but the reality of Matthew 5 is that we are called to a radical lifestyle. You may recall that at the end of last week’s reading about being salt and light, Jesus says that he has not come to abolish the law – of which the 10 commandments are the most familiar to us – but to fulfill it.

Then, in today’s reading, he uses the phrase, “You have heard it said, but I say to you…,” repeatedly. We might be tempted to think that Jesus is replacing the law’s expectations, but the reality is that he is intensifying them. More, not less, is expected of those who are Jesus-followers.

Why??? The simple, yet not so easy, answer is that God cares about our relationships, both close and distant ones because how we treat one another impacts the state of the world and reflects whether God’s will and ways are being done. This is so important that Jesus uses hyperbole (an exaggeration that is for effect and is not supposed to be taken literally) like cutting off offending body parts – to magnify the point. Also, Jesus not only focuses on behavior (the external) but on attitudes and emotions, the internal, which is a radical step.

Let’s work our way through today’s Gospel. Beginning with verses 21-26. The commandment in verse 21 is not difficult for most of us to follow, “Do not murder,” but we are challenged when it comes to not being angry at others, insulting them and calling them names. Did you notice that in each case, the punishment gets progressively harsher? The conclusion is that the hostility that results in verbal abuse is damaging and just as worthy of punishment as murder. WOW, that’s something to give careful consideration! It’s not true that “sticks and stones will break my bones, but words will never hurt me;” words can lead to the death of much that is good and right in our lives and in the world.

The alternative to acting in anger is to seek reconciliation; this is important because a conflict between people impacts our relationship with God. (Because we are living contrary to God’s will for us.)  Besides, being reconciled with one another just plain makes sense in an unpredictable world, Jesus notes. The conflict may lead from bad to worse; it’s better to resolve it.

Next, we come to verses 27-32 about the uncomfortable topics of adultery and divorce. Again, the focus is on relationships. Jesus is concerned about an act of unfaithfulness that begins with inappropriate thoughts, but there’s more to this passage of scripture than that. Surprisingly, within his first-century context, Jesus is standing up for women in both his comments about adultery and divorce. According to commentator Carla Works, at that time, women were dependent on fathers, husbands and, in some cases, brothers for their daily livelihood. To be used and discarded by another had serious repercussions, which is why Jesus speaks so harshly about adultery and divorce.

If a woman was seduced or raped, she was to blame, and she brought shame on her family. In short, she was damaged goods. She probably would be cast out and forced to rely on begging or prostitution to survive or enter a relationship that was considered immoral (adulterous), and in which abuse was the norm. Divorce created a similar situation since a man could divorce his wife for any reason, including burning supper. All he had to do was announce in the public square that he was divorcing her, and she had no recourse. When that happened, she probably would be rejected by her family and suffer the consequences.

In contrast, imagine this … in a world where women were treated as property to be used and discarded … Jesus not only stood up for them but allowed them to be disciples. That’s radical! (1)

Finally, in verse 33-37, Jesus addresses the topic of integrity.  The gist of it is that followers of Jesus should have no need to swear that they are telling the truth, or that they will do what they promised, because they are, at the core, truth-tellers and promise fulfillers.

In all this Jesus is creating a community that is organized around love, not power. It’s interesting, isn’t it, that we still need this guidance from Jesus? In each of these sections of scripture, there is a deeper message about how we are to live … set anger aside, be willing to reconcile, be faithful and fair, be concerned about another’s well-being, show integrity.

The Sermon on the Mount not only reminds us of the radical way Jesus wants us to live but also how great the need is for us to do so. How often in the last month have you been appalled by displays of anger and name-calling, not just behind closed doors, but in public, on television and using social media?  And, retaliation, when one feels wronged, is the norm, not reconciliation, which is what Jesus requires of his followers.

The “Me Too” movement in support of people who are victims of sexual abuse addresses misuse of power, which is also true of sex trafficking and pornography. People are treated as objects with no concern for their well-being. That’s precisely what Jesus was addressing in his comments about adultery and divorce – how people (women, girls) are used and discarded for another’s desires or addictions or at a whim. Jesus is so against this that he uses extreme language to reject it, “If your right eye causes you to sin, tear it out and throw in away….” He’s not saying to actually do this, but his words magnify the seriousness of such thoughts and behaviors. It’s as if Jesus saying, “Pay attention. This is wrong. Stop it!!”

Has it seemed that truth, integrity, keeping one’s word, is no longer valued? It’s so bizarre, isn’t it, that we live in a world where truth (or fact) is not absolute and we shrug our shoulders when lies are uncovered. There’s no doubt that that’s not in-line with what Jesus wants for us.

And why does Jesus even ask us to live in this radical way? It’s because God wants people to thrive, and that happens through loving and respecting one another. It’s not an easy way to live. So…we are thankful for God’s grace which forgives our falling short and for the Holy Spirit that both makes us uncomfortable when we do and empowers us to live in a new, radical way. When we hear Jesus say, “You have heard that it was said, but I say to you,” he is calling us to live in a radical way, but it also is as if God is saying, “I love you.” AMEN