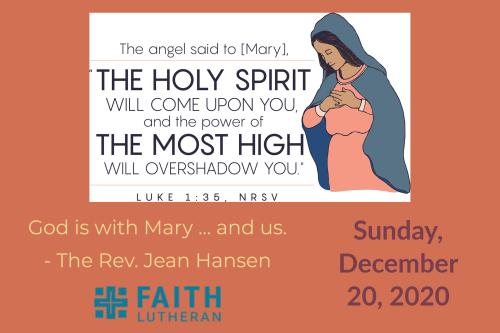 It is the Fourth Sunday in Advent; how can that be? Christmas Eve is Thursday; the two Christmas Eve services are nearly recorded and are in the editing process. They will “premier” at 3 p.m. and 9 p.m. on Thursday.

The early one is a service in which children and youth are involved, as well as our church band, BOUND, with a Children’s Message by Dineen Dowling as the sermon. At the later worship, Bob Mollard will play the organ, and guests soloists and instrumentalists also will provide music. There will be a sermon, Holy Communion, and candle lighting.

You can participate more fully at home, at 9 p.m., by requesting a Home Communion bag; then, receive the elements consecrated today during the later Christmas Eve service. Also, you can participate by having a candle or candles available to light.

Many people have worked hard to make these services special, and to involve more people that would not have been the case if we were live-streaming worship. I am thankful for such creativity and commitment. Yet, I will confess to you that it feels, well…it feels odd.

When my “parts” are recorded on Monday, I surmise that it won’t feel quite right; Christmas Eve, completed? I had not experienced the whole service; it just did not feel right. I guess that is the point, really; our situation this year does not feel comfortable because it is not that to which we are accustomed. Life has thrown us a curveball, and our job has become discovering how to keep swinging without striking out.

I found myself wondering if Mary might have something to teach us about managing the unexpected. I would say she has to deal with more than a few surprises in today’s brief Gospel lesson. Let’s recall, first, that she probably was a young teenager, betrothed to a man named Joseph, expecting to fulfill her destiny as a wife, and eventually, a mother, when an angel showed up with an intriguing message. It began with: “Greetings favored one! The Lord is with you!”

It probably is important to note that Mary was favored not because she was particularly holy or perfect – although those qualities have been placed upon her over the decades – but because she was chosen and because God’s presence was and would be a reality for her. Her response to the angelic visitation was, we read, to be perplexed and to ponder. I always thought what an understatement. I am guessing she was questioning her own sanity and afraid.

However, the real curveball is coming next. The preface for it is to tell her not to be afraid, which she obviously is, and to remind her that she is God’s chosen one. I have read that the better translation is, “Stop being afraid,” a command, with the underlying message being, because you can trust God. That is a good thing because God then throws the unexpected pitch: “And now you will conceive in your womb and bear a son, and you will name him Jesus. He will be great, and will be called the Son of the Most High, and the Lord God will give him the throne of his ancestor David. He will reign over the house of Jacob forever, and of his kingdom there will be no end.” (Luke 1:31-33)

And Mary, little Mary, amazingly and boldly asks, “How?” Pastor JoAnne Taylor surmises that Mary trusted that everything the angel said was true; she just wondered how it was going to happen. What is the protocol for virgin birth? How does infinite God become a finite human? Mary wanted to know how exactly is this going to work? (1)

The answer boils down to a simple, but not easy-to-grasp phrase, “Nothing is impossible for God,” including the Holy Spirit putting these words in Mary’s mouth: “Here I am, the servant of the Lord; let it be with me according to your word.” (Luke 1:38)

I like the way commentator Scott Hoezee describes the wait for Mary’s response. “The whole cosmos, all the hosts of heaven from the archangel Gabriel on down, are holding their collective breath and sitting on the edges of their seats. All eyes and ears are trained on one little girl, perhaps no more than 12 or 13 years of age. She’s about to get the shock of a lifetime, but what will she say in response? What will her answer be? Will she get it right? As Frederick Buechner once put it, Mary was probably too dazzled to notice, but maybe just beneath his wings and bright garments even Gabriel was trembling a little in nervous anticipation at how this encounter was going to go.” (2)

The curveball was coming her way, and Mary steps up to the plate. What does she teach us? First, listen to heavenly messengers and remember, they can come in all shapes and sizes. In fact, some may not even realize they are heavenly messengers. Second, be alert to the signs of God’s presence with us; if it is difficult to see them, look again. Third, stop being afraid; you can trust God. Fourth, ask for, seek out details of how God is working. (I guess that could fall in the category of trust but verify. Remember, Mary believed but asked “how”?) Fifth, ask for the Holy Spirit’s help to say, “Here I am, I’ll do my best,” believing that God’s grace will be revealed in our lives.

In today’s first reading, which occurs in the Gospel of Luke after Gabrielle’s visit, Mary sings a song of praise called the “Magnificat,” which is Latin for Magnify. So, I guess the sixth thing Mary teaches us is to be thankful.

Mary proclaims, “…from this day all generations will call be blessed.” She is not announcing that she is living, or will live, a life of privilege and comfort, that all is going well, and all is right in her corner of the world, which is how being blessed is often used today. That is NOT what being blessed means for Mary.

In fact, she appears to be anything but blessed – a young, poor, uneducated girl who is about to be disgraced by being unmarried and pregnant. Instead, she is blessed because she will be used by God to bring grace and forgiveness to the world, to lift up the lowly, and include all in God’s embrace. Our thankfulness, then, should not be because of what we have, or because all is well in our world, but because, like Mary, we can be used by God to as conveyors of grace and forgiveness through Jesus.

When we view the world from that broad perspective, then the surprises we face, like a pandemic that alters what is usual – can be realigned. It is true, this Christmas is different, but the reason for celebrating is not. God is with Mary … and us. AMEN