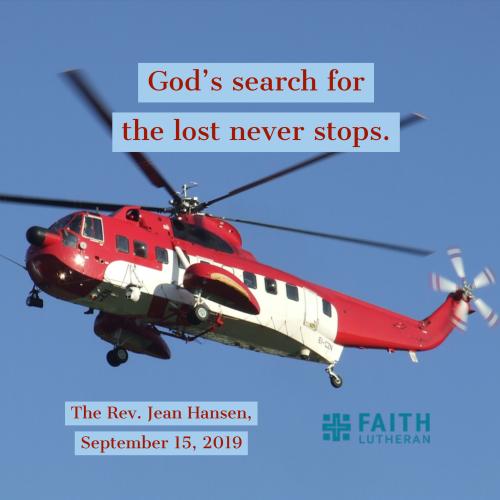 God Never Calls Off the Search

God Never Calls Off the Search

It’s not what is lost that’s the focus of today’s Gospel lesson, it’s the one who is doing the searching that is the focus … that’s God, presented by Jesus as a shepherd looking for a lost sheep and a woman searching for a lost coin. Another way to look at it is to view God as the volunteer search party.

The what, you ask??? The volunteer search party – commentator Pastor Melissa Early reflects on those situations in which a person is lost, and volunteers are called upon to help search. For example, there’s the story of Amanda Eller who went on a hike in a forest preserve in Maui. She went off the trail and got turned around, to put it mildly. Amanda was lost. On day three, she fell off a cliff and fractured her leg. The next day she lost her shoes in a flood. Official searchers suspended the search 72 hours after it began, but the volunteers persisted.

According to Pastor Earley, the volunteer searchers climbed, hiked and dove looking for Amanda; the man coordinating the search was fired from his job for missing work. A helicopter was hired by the family. And, finally, 17 days after she set out for that hike, Amanda was found injured, dehydrated, but alive. It’s stories like that which caused Dave Prouty, president of the Mt. Hood Search and Rescue Council of Oregon to say that “if it were up to volunteers, I don’t think we’d ever call off a search.” (1)

God is like those volunteers. Sometimes suspending a search may be necessary for people, but God doesn’t stop; that’s the message of today’s parable. First, there’s the shepherd’s search for the lost sheep, one of 99, which seems a usual thing for a shepherd to do. But, by doing so the shepherd puts the 99 at risk, leaving them in the wilderness with no protection or shelter. That’s not usual, a first-century shepherd would have viewed the lost sheep as a business expense and moved on with the 99. But that’s not the case when God’s the Shepherd; then the search is extensive, and when the sheep is found it’s carried home, it doesn’t even have to walk, and there’s a big celebration because the one is found.

And, while it makes sense for a woman to light a lamp and search high and low for the coin, given that it’s a tenth of what she possesses, the fact that she calls her friends and neighbors together for a celebration when she finds it is a bit odd. When you invite people to your home, what does a host or hostess do? They offer food and drinks. Could it be that she spent as much on refreshments for the party as she recovered from her search? That’s how God celebrates, Jesus says, when someone who is lost is found.

We might think of being lost in this context as wandering off the path God would have us walk or losing sight of what it means to follow Jesus (or having never walked on the path or known Jesus in the first place). Although the passage describes God’s joy over “one sinner who repents,” what is being referred to is not just remorse. The term (in Greek) implies turning around, a change in perspective, going the other way. To be found means that someone’s heart, mind, soul and thus, actions, are on God’s path or that Jesus is in the lead in a person’s life; when that happens, there’s excessive joy!

Pastor David Lose tells a story about his son to describe what that type of joy looks like; perhaps some of you can identify with this account. Shortly after moving to Minnesota, he took his son, Jack, then four-years-old, to the Mall of America. This shopping center is so large that it was an amusement park in the center, and that’s where Jack wanted to go. They looked at the various rides and Jack was particularly fascinated by the little remote-control cars, although he was too young to operate one. Because he was glued to the spot, or so it seemed, Pastor Lose let go of his hand. The next thing he knew, Jack was missing.

Pastor Lose frantically looked all around the area, and then expanded his search thinking he’d find him any minute, but he didn’t. Then, he became scared, given the stories of child abductions, and found a security guard, admitting that his son was LOST.

Within three minutes of the guard calling in the description, Jack was found. He had wormed his way in front of a crowd and was watching another ride, oblivious to the fact that he had caused his father a near heart attack.

Listen to Dr. Lose’s description of his reaction: “I suppose I could have been mad at him for wandering off, or upset at myself for letting him, or embarrassed that I’d recruited security guards when he was so close to me all along. I’d understand if that’s what other parents felt. But to be honest, none of these emotions were mine. No, I was just relieved and, even more, joyful. My son, who had been lost, was found. Safe and sound; back with me. It was pure joy.

And that’s how God feels anytime anyone is drawn back into a relationship with God, or chooses life, or lives up to his or her potential, or helps out another, and in all these ways is found. It’s joy, pure joy! (2)

The message today is that like a volunteer search party or a parent whose child wandered off, God is absolutely committed to finding us. That’s a radical idea for Jesus’ listeners. Did you notice how the Gospel reading began? It says that Jesus was sharing meals with tax collectors and sinners – which implies acceptance and friendship – a situation that upsets the religious leaders. Another way to put it is that Jesus is interacting with public outcasts and untouchables and those who are trying to live up to the laws and traditions of their religion are concerned about the message Jesus is conveying through his embarrassing behavior.

So, Jesus tells three parables (we focused on two of them today) which contain radical ideas for ALL of Jesus’ listeners. God does not sit around, waiting for us to find our way and come to him, but God takes the initiative. God searches for us. God looks under every bush and in every nook and cranny. God is fervently looking for God’s lost children. God even empowers people to join in the search. Sometimes that way that happens is extreme.

This past week was the 18th anniversary of the attacks of September 11. There are many examples of God using people on that day, one is of a man named Welles Crowther, who was an equities trader in the World Trade Center. After the second tower was hit, which is where he was, Welles led everyone he could find down the steps to safety. He went back at least four more times to search for people lost in the confusion and led them out. When the tower collapsed, he was in it. One might say he lost his life, but actually he was eternally found. God used him to find people who were lost. (3)

The idea that God loves us so overwhelmingly that God’s search for the lost never stops is certainly a radical one. But the idea that God commissions us to be a part of the volunteer search party, keeping an eye out for those who would struggle to believe that God is looking for them, is even more amazing. And, God celebrates! Did you notice, the focus in on being found, NOT the fact that one was lost. God doesn’t scold the formerly lost one, asking where he or she has been, or why they got off track. NO … Gods cheers at their being found, and the celebration begins! That, my friends, is GRACE; it’s the guidepost that directs us, and that makes us members of God’s volunteer search party that never gives up.  AMEN