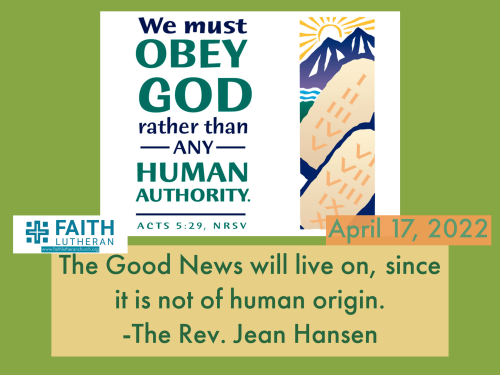 The Good News Lives On!

Here it is, the Second Sunday of Easter, and Jesus is still alive! Not only that but the Good News of the resurrection lives on, in spite of facing numerous roadblocks over the years, including an early one described in the reading from Acts 5.

For nearly all of the next seven Sundays, the sermon focus will be on the first lessons from the book of Acts, or more properly, the “Acts of the Apostles,” which is volume two of the Gospel of Luke, written by the same author, around 80-85 CE.

The arrival of the Holy Spirit is at the beginning of Acts, but we won’t focus on that watershed event until we celebrate Pentecost on week #7; by then, we will have seen what the Spirit made possible. That’s what the coming weeks are about – how the Holy Spirit was at work in the lives of Jesus’ first followers. Let’s begin with a summary of what happened prior to today’s reading from Acts 5.

As we saw in the Gospel lesson, after the crucifixion of Jesus, his followers are hiding behind locked doors. The risen Jesus appears to them and continues to do so for 40 days until he ascends into heaven. Before that departure, though, he tells them to wait in Jerusalem for the promised Holy Spirit, which they will need to be Jesus’ witnesses. Pentecost and the Holy Spirit arrive! (We’ll be talking about that later, as I already mentioned.)

With the Spirit comes sermons that convert thousands, miracles, and, you guessed it, trouble. Peter and John are arrested, imprisoned, and asked, basically, “what’s up with all this?” They proclaim that all they are doing is “by the name of Jesus Christ of Nazareth, whom you crucified, whom God raised from the dead.” (Acts 4:10)

Seeing their boldness and not wanting their proclamation to spread further, the Jewish authorities order them to “speak no more to anyone in this name,” which they immediately defy. So, after more preaching and more miracles, all of the disciples are arrested, locked up, and told to “stop this nonsense!”

When the authorities send for them the next day, they find that the jail cell in which they were placed is empty. As the temple police reported, “We found the prison securely locked and the guards standing in front of the doors, but when we opened them, we found no one inside.” (Acts 5:23) The followers of Jesus are a determined bunch; they are back in the Temple teaching. (Of course, what else would you do if an angel of the Lord opened the prison doors and told you to “Go, stand in the temple, and tell the people the whole message about this life?”

They are all hauled back in to face the Sanhedrin, and that’s where today’s reading begins. This is a lot of excitement for that Council to deal with; these ordinary people are upsetting the whole city of Jerusalem with their “Jesus talk.” As one commentator pointed out, the entire authority of the Jewish religion confronts the entire authority of this “Jesus movement,” the 70 against the 12 (+). Will the 70 be able to silence them?

By the way, shouldn’t these followers of Jesus be afraid? After all, they are being questioned by the very ones who orchestrated Jesus’ death. Just look at Peter, who denied Jesus and hid behind locked doors; now he’s boldly preaching and defying these religious leaders, saying, “We must obey God rather than any human authority!”

(Let me go off on a bit of a context rant here; that phrase has been used to justify all sorts of defiant behavior, yet they should not be viewed as blanket permission to pursue a cause just because someone believes God is on his or her side. In context, the disciples were defending their right/obligation to preach the Gospel, which Jesus had told them to do. Whether or not that concept applies to another 21st-century situation takes careful consideration.)

Getting back to the account, note that the disciples include their Jewish opposition in their explanation, “The God of our ancestors raised up Jesus.” In other words, your God, our God, Yahweh, raised Jesus. The resurrection is the heart of the Gospel, but there’s more – they proclaim that the earthly Jesus, the crucified Jesus, the risen Jesus, is now with God. He is our Savior, they announce, the giver of repentance and forgiveness.

On this Spirit-empowered witness, the cornerstones of our faith, the Christian church thrived and continues to live, or, without it, die. But let me ask a challenging question: could that – death of the faith - happen? We know that opposition to the Christian faith is prominent in our world. Of even greater risk is the reality of apathy toward the Gospel. And, too often, the church’s focus is less about what God has done in Christ and more about what we need to do in the name of Christ.

With those sobering thoughts in mind, I find hope in the part of the text not included. Let me share what immediately follows the assigned reading:

“When they (the Sanhedrin) heard this, they were enraged and wanted to kill them. But a Pharisee in the council named Gamaliel, a teacher of the law, respected by all the people, stood up and ordered the men to be put outside for a short time.”

This teacher then pointed out two incidents of “false prophets” developing a following, which dispersed when the leader was killed. Quoting scripture again:

“So, in the present case, I tell you, keep away from these men and let them alone; because if this plan or this undertaking is of human origin, it will fail; but if it is of God, you will not be able to overthrow them – in that case you may even be found fighting against God.” (Acts 5:33-39)

The Sanhedrin was convinced, yet, the disciples were flogged and ordered not to speak in the name of Jesus. Then they were released. Obviously, they defied that order since the chapter ends with:

“And every day in the temple and at home, they did not cease to teach and proclaim Jesus as the Messiah.”

Why? Why do they take the risk? It’s because Jesus won the victory over the worst thing the world could dole out – death itself. All over the world, we are still celebrating the great good news of Easter. Jesus is alive! That proclamation, and all that accompanies it, maybe happening – and need to happen - in new ways, ways that are uncomfortable to many of us. And the witness to the Gospel may be happening in some places more than others – like Africa, for example. (Could we in the United States soon be visited by African Christian missionaries?)

It may not be in the ways to which are accustomed, but the Good News will live, in spite of human-created roadblocks to stop it. Last evening on the news there was a report from a city in Ukraine of an Orthodox Christian church that had been destroyed in the war. The point was made that it had survived World War II, but was now an empty shell, and this year there would be no Easter. (The Orthodox Easter is today.)

I thought to myself, that’s not quite true; there will be no Easter worship in that church building, but there will be Easter. In spite of destruction and death, the Christians of Ukraine, even if it’s just a few, will celebrate that Jesus is risen.

The Good News will live on, since it is not of human origin. (Whether a particular church or denomination survives, or dies, is another question all-together.) The Christian faith will live on.   We not only play an important part in that happening but are privileged to do so. AMEN