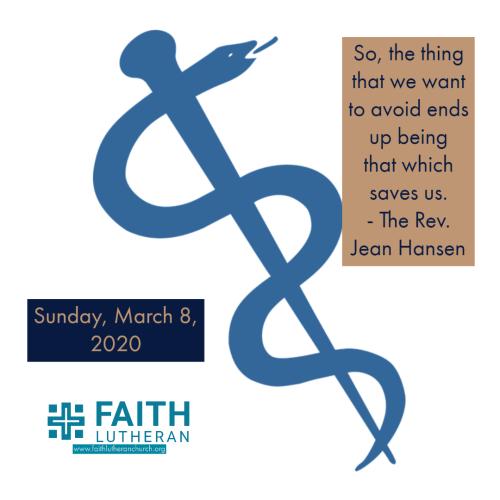 I wonder why Nicodemus came to see Jesus?

The closing verses of today’s Gospel lesson are so well-known that if someone in a crowd has “3:16” written on his or her baseball cap, many people will recognize those numbers as a reference to John 3:16. “God so love the world that he gave his only Son, that all those who believe in him may not perish but may have eternal life.”

Because that part is so familiar, we may lose track of the beginning of the account, which features a man named Nicodemus. He was a Pharisee, a Jewish leader who knew Mosaic law. He also was a member of the Sanhedrin court, a person of power who enforces the rules.

Yet, he goes to see Jesus under cover of darkness. That part is easy to explain; Jesus is a rule-breaker who is gaining popularity among the people. He’s unorthodox, so Nicodemus does not want to be seen talking to him. But why did he go in the first place?

Jesus was more than a curiosity; it seems to me. Nicodemus wanted or needed something he thought Jesus could give him. What was it? Did he simply want Jesus to explain his actions, or was he looking for insight, for hope, for meaning? Did he go away satisfied?

It’s clear that he struggles to understand what Jesus says about being born from above and being born of the Spirit. Commentator Emily Heitzman writes that it makes sense that Nicodemus is in the dark, so to speak. He had devoted his life to studying the Torah and to enforcing a long list of commandments and teachings (laws). He had all the credentials and was more religiously qualified to enter the kingdom of God than most people. How could Jesus tell him that his heritage, obedience to the law, and positions of leadership counted for nothing? And even more upsetting, was Jesus saying that this kingdom of God might be accessible to anyone who was born from above, to anyone who was born of the Spirit? Was it open to those who were not even ancestors of Abraham or who did not even observe the Mosaic law? (1)

No wonder Nicodemus was astonished. The last thing we hear from him is a question, “How can these things be?” We don’t know if Nicodemus hung around to listen to what Jesus said next. Perhaps he was offended when Jesus asked how, being a teacher of Israel, he could fail to understand, and went away in a huff.

Had he stayed, which I think it’s likely that he did, he would have heard Jesus refer to an odd Old Testament tale in which the rebellious Israelites were bitten by poisonous snakes, a means of punishment sent by God. Evidently, the snakes were a helpful reminder of their sin (perhaps of sin in general), so they repented and cried out to Moses and God for help. In response, God told Moses to make a bronze snake, place it on a pole and lift it up above the people. If they had been bitten, when they looked at the snake, they were healed.

It’s interesting, isn’t it, that snake bites were killing the Israelites and yet it was looking at a snake that saved them. That reminds me of the concept of a vaccine. Which we’ve heard about more than usual, due to the outbreak of coronavirus - Covid 19. It is a new strain of a common virus for which there is not yet a vaccine, and people do not yet have an immunity. The lack of a vaccine is contributing to the fear of Covid 19 because it’s something over which we have little control. (And being out of control tends to drive humans to distraction, causing them to cast blame and become overly determined to assert their power.)

Anyway…we all know, I think, how vaccines work: a small amount of the disease to be avoided, either an inert version or a sufficiently weak version of the disease, is injected to keep people from getting the full-blown illness. Our cells then produce the antibodies that will ward of the disease should we later come into contact with it. So, the thing that we want to avoid ends up being that which saves us. Keep that in mind as we return to the Gospel lesson.

As odd as it seems to us, Nicodemus and his Jewish friends would have viewed the bronze-serpent-story in which the problem was the solution as representing God’s mercy, love, and grace. So, what might they have thought when Jesus says, “Just as Moses lifted up the serpent in the wilderness, so must the Son of Man be lifted up, that whoever believes in him may have eternal life?” Just as … in the same way that … mercy, love, and grace were experienced in the wilderness when the serpent was lifted up, mercy love, and grace will be experienced when Jesus (the Son of Man) is lifted up.

It’s a reference to the crucifixion, although those who were present that night when Nicodemus visited would not have understood that was the case. Just as the Israelites were saved from sin and death by the conveyor of sin and death (the serpent), which was transformed for God’s purposes, so it is for us. Death is our problem, and death, transformed by God, saves us. The death of Jesus inoculates us from the very thing that we fear and wish to avoid the most, death. When we look up at Jesus on the cross, we receive the gospel vaccine. (2)

It’s stated so clearly in verses 16 and 17, “For God so loved the world that he gave his only Son, so that everyone who believes in him may not perish but have eternal life. Indeed, God did not send the Son into the world to condemn the world, but in order that the world might be saved through him.”

Just as we cannot control a virus, we cannot help ourselves be worthy of forgiveness. Nor can we earn eternal life, which, by the way, begins in the here and now as we follow Jesus, sharing his unconditional love, and it then continues beyond this life.  These gifts are the result of God’s astounding, unconditional love for humanity.

We started with Nicodemus, so perhaps we should end by considering the rest of his story. Did he become a disciple of Jesus? We encounter him twice more in the Gospel of John; in chapter 7, he comes to Jesus’ defense during a conflict between Jesus and the religious authorities. In chapter 19, he helps Joseph of Arimathea, a secret disciple of Jesus, with the burial of Jesus’ body, bringing burial spices for the preparation of the body.

Was he a disciple of Jesus then? If not, I like to think it was a mere three days before this one who questioned how one could be born after having grown old committed himself to become a follower of Jesus. Or, quoting Frederick Buechner, “Maybe two, three days later, when Nicodemus heard the report that this Jesus had risen for the dead, maybe that old senior citizen Nicodemus found himself inexplicitly weeping – crying and carrying on like … well, like a newborn baby.” (3) He had been born from above. AMEN