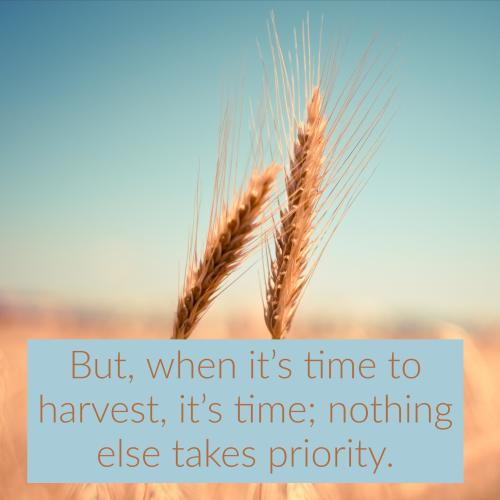 A Harvest of Hope

Whenever I hear Jesus’ words, “The harvest is plentiful, but the laborers are few; therefore ask the Lord of the harvest to send out laborers into his harvest,” I think of the same thing. That’s especially true if it’s near July 4, as is the case this year. That’s because of the confluence of three things in my life.

In Nebraska, where I grew up, the wheat harvest was usually around July 4th where my grandparents and cousins lived in the southeast end of the state. As a child, we often spent July 4 at their homes. That meant experiencing the wheat harvest first-hand because my grandparents grew wheat on their farm and my Uncle Charley ran a grain elevator, which meant he worked long hours during all harvest seasons. Any July 4th festivities took a backseat to the harvest, which was an urgent concern. And, if it was dry, fireworks – which could be easily purchased and were legal to use -  were out since having a ready-to-harvest wheat field catch fire due to a stray spark was not an option.

I guess all that is not a worry this year; the fields are so wet following spring floods that many crops were not planted and what was was washed away or is behind in its development. But, when it’s time to harvest, it’s time; nothing else takes priority.

There’s that same sense of urgency in today’s Gospel lesson; other concerns take a back seat. We read that Jesus sent out a band of his followers “into the harvest”; they traveled ahead of him to places he had not yet been, preparing people for Jesus’ arrival. I remember that in a previous sermon I called them the “advance team”.

The sense of urgency was so great that they were to take no bags and make no reservations but depend on those they met along the way to provide shelter, food and safety. In other words, they had to rely on the grace and provision of God. There were two clear messages for them to share: “Peace to this house,” and “The kingdom of God has come near to you.”

Commentator Pastor Janet Hunt calls Luke 10 the “Owner’s Manual for Missionaries.” It conveys this information: The work is urgent. It won’t be easy. You don’t need to take much with you to do this. Also, you’ll have a companion with you. You have a script. Accept what is offered by those who welcome you; don’t look around for something better. Sometimes when you think the harvest is ready, it won’t be. You’re not in charge of how people respond. (1)

That’s fairly straight-forward, don’t you think? But, how does it apply to us? Do we see ourselves as missionaries? It’s no doubt true that there are people around us who are ready to hear about the love and grace of Jesus, even if they do not quite realize it.  And, there are ways to adjust what’s in the manual to our situations.

For example, there’s the script. How might we restate those proclamations, “Peace be to this house,” and “The kingdom of God has come near to you,” using everyday speech, in our day-to-day situations? Give that some thought. Imagine yourself having lunch with a work colleague or visiting a new neighbor. Let’s say this isn’t your first meeting, you are getting to know the person. The followers of Jesus were told to do this by remaining in one place for a while, sharing meals with people, no doubt getting to know them.

So, back to the 21st century, as happens among acquaintances and friends, a challenge, a worry, a joy is shared. Now, you have the opportunity to offer a word or peace or acknowledge God’s presence. You might say something like, “It will be OK,” or “Don’t worry”, or “Don’t give up,” or “You are not alone,” and then add, “because God is with you.” Or, “That’s tough”, “What a pain,” but God is with you. When the topic is joyful, there’s always, “I thank God with you!” Or, maybe, “I know God will bless your new home.”

It sounds a bit stilted as I say these things here…but if you pay attention, you might be surprised how often opportunities to proclaim a word of peace, and that God is near, present themselves. Of course, we also do that through our actions: at DLM Food and Resource ministry, when we  carry groceries or hold a baby so his mother can look for clothes, and do it with warmth and an attitude of friendship, a word of peace is offered and God’s presence is obvious.

It’s true that being missionaries is not easy, even when we do not leave home to do so, it still requires intentionality and compassion. But, think about what it was like for the 70 in today’s Gospel lesson who Jesus trusted to prepare the way for him. As Lori Claudio notes in her sermon on the text: “…they were sent to preach the message of a kingdom that was near … but not fully in. There was no cross; there was no Easter story. There had been no pouring of the Spirit at Pentecost to empower them. They carried no Bible or sermon. All they had was a message, a greeting of peace and blind trust in the one who sent them.”

And then she adds, “Do you think these 70, of whom we are told very little, might have been a little weary after all this travel. Do you think that perhaps the thought of giving up crossed their minds? Could it be that they might have felt at some point, “Well, if people don’t want what we bring, why bother? What’s in it for us?” (2)

No doubt, they became discouraged, and yet the Gospel says that they returned with joy, thrilled with the ways God had worked through them. Jesus reminded them not to get too caught up in their successes, but to rejoice instead at being claimed by as loved and forgiven ones.

Our situation is quite different than the 70. For one thing, we know the end of the story, that Jesus was raised from death to life. And, we have been filled with the Holy Spirit, given the gift of faith, and empowered to share it. We, at least most of us, are not going to unknown places and staying in the homes of strangers. Instead, we are called to share our faith in our day-to-day lives, but also in our community, with people and in places that we might not encounter regularly. That’s the harvest that is ready, and we are the laborers. We bring forth a harvest of grace and of hope in the lives of those around us.

The last time I was at DLM there was a young woman in the clothing room where I was assigned, picking out items for herself. As Polly Dobkin and I helped her bag her choices, she told us that it was difficult for her to come into new places when she didn’t know what to expect. In fact, she had waited in the car that day, afraid to come in until one of people she was with gave the OK. Then she said something like, “Everyone here has been so friendly, so nice to me.”

I took that as meaning there were times – probably more than I can imagine – that she did not feel accepted and welcomed. In other words, she had received a word of peace that day, and experienced God’s presence, even if she didn’t use those words, and neither did those who helped her.

That’s a good reason to focus on what Paul writes in his letter to the Christians of Galatia. “So let us not grow weary in doing what is right, for we reap at harvest time if we do not give up. So, then, whenever we have the opportunity, let us work for the good of all, and especially for those of the family of faith.” Now, I do not know who Paul included as “the family of faith,” but I’m fairly confident in saying that we are all God’s children, and those who realize it are sent out to harvest the hope that good news brings in the lives of those who do not realize it.  AMEN

(1) “An Owner’s Manuel for Missionaries” by Janet Hunt, Dancing with the Word, June 30, 2019, www.dancingwiththeword.com