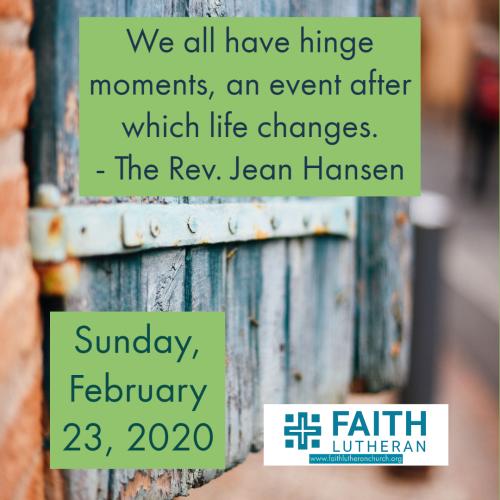 We just read about a “hinge moment,” or so say commentator Erica Gibson-Even. She writes that the Transfiguration points to the hinge of our life of faith. (1) One of the definitions of a hinge is anything on which matters turn or depend. In terms of hardware, a hinge is a device on which a door swings so that it can be opened and closed, making it easier to pass from one location to another. There are several ways to think about today’s Gospel lesson as a “hinge moment.”

For example, the Transfiguration marks the conclusion of the time when we focused on the nature of Jesus’ ministry and his identity, which we call the Epiphany season. In fact, this account places a perfect bookend on the Epiphany season since the same message is spoken by God on the first Sunday of Epiphany when Jesus was baptized, and today, “This is my Son, the Beloved, with him I am well pleased,” Our focus switches now to grasping the sacrificial love of Jesus in the days leading up to his death. Lent begins. It’s a hinge moment.

It’s also a hinge moment for Jesus’ disciples, Peter, James, and John, who climb that high mountain, experience Jesus radiating light, and encounter Moses and Elijah, heroes of the Jewish faith. Jews of Jesus’ time expected the return of these great prophets as the precursor of a divine revolution. No doubt Peter, James, and John are thinking they are witnessing the beginning of the end of Roman rule, with Jesus as their leader.

It’s a hinge moment as they stand in awe. Peter offers to build dwellings as an act of hospitality, perhaps. But, then, the scene intensifies; a cloud (the ancient representative of God) overshadows them, the voice of God thunders, and the disciples collapse in terror. It dawns on them, not for the first time, that Jesus is far more than they expect or understand; he is power and glory and all that their eyes cannot begin to perceive. (2) Commentator Scott Hoezee surmises that in the Transfiguration, God shows the disciples what Jesus (as Son of God) had always looked like before he emptied himself of certain ordinary divine traits to become human. Something that was part of who he had been all along was displayed and affirmed with God’s proclamation. (3)

But, did you notice the very vital detail in this hinge moment? The disciples are lying there on the ground, overcome with fear, and verse 7 says, “But, Jesus came and touched them, saying, “Get up and do not be afraid.” When they look up, who do they see? It’s only Jesus. And, so, they get up, and descend the mountain; Jesus sets his face toward Jerusalem and his death. Surely, it’s a hinge moment.

We all have hinge moments, an event after which life changes – the diagnosis, the date, the decision that is the hinge between before and after. Sometimes that moment is joyful, other times challenging, and always significant.

And, as was true for the disciples, Jesus touches us when we feel as if we are lying flat on our faces in fear…or anxiety…or frustration…or doubt…or are overwhelmed by the moment, the hinge moment. It’s interesting, isn’t it, that the disciples could not bear to hear God speak from the cloud, but they can listen to Jesus, their friend, teacher, brother, and so can we. He will lift us up with a compassionate, healing courage-inducing touch.

I’m listening to a book titled, Daring to Hope, which is the continuation of the story told in the book Kisses from Katie (which I also have read) about a remarkable young woman, from the United States, who at age 19 moved to Uganda in Africa, adopted 13 girls and founded a ministry that cares for vulnerable children and families in Uganda.

The second book takes place 10 years after the first, and Katie is experiencing both joy and sorrow as she walks alongside people who are suffering. She calls one particular time in her life a “season of grief,” during which one of her daughters, whom Katie had cared for since she was a year old, and whose adoption was near to being finalized, was returned to her biological mother at age 4. Then, while processing that loss, Katie and her family were given the opportunity to practice radical hospitality, opening their home to people with significant medical problems. They faced the pain of loving people and then having to let them go, often due to death.

As I listen to this book, I often think that this young woman has more faith in her little finger than I have in my whole body. But she does struggle; she questions God, yet she also seeks God and encounters God in her pain.

A simple story she tells is one of my favorites. At one point, Katie engages grief counselors to assist some of her girls who are struggling with the traumas of their lives, past and present. And, she ends up seeking support herself. The counselor encourages her to say, in her prayers, “God, I’m angry.” But Katie can’t, she says, not because she thinks it’s wrong to be angry at God, but because that’s not quite what she feels. So, after searching for the right word, she finally prays, “God, I’m tired.”

As today’s Gospel lesson ends, there are no more prophets from long ago, no Divine announcements, no radiance. Life is back to normal for the disciples. Or is it? No, it’s not; they have been changed, and there is no going back. That’s true for us too in our hinge moments, even (especially) the most difficult ones, because that is when Jesus is the most vividly present if we would open our hearts to see him.

In the poem “Sweet Jesus,” Christine Hemp writes these words about the Transfiguration, putting them in Peter’s mouth: “When light stopped throbbing, tympani broke the sky. It shook us hard. That voice. Nothing I want to hear again, believe me. Later, stumbling downhill, following his easy stride, we knew our former selves were done. Sweet Jesus.” (5)

We knew our former selves were done … but Jesus had been revealed in a new way. AMEN