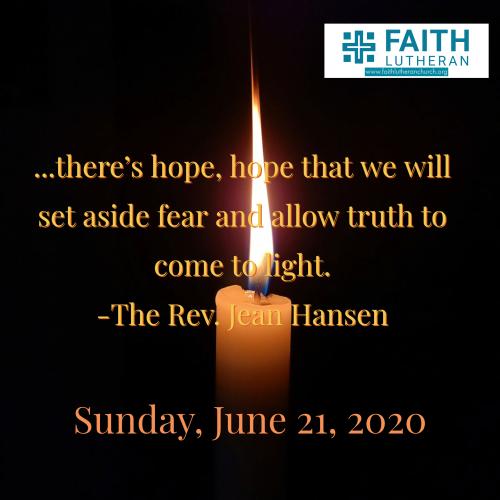 It is Not Pretty

You have heard the expression, I suppose, that proclaims, “It is not pretty.” That’s usually an understatement referring to some unacceptable or painful or difficult circumstances. In March, medical personnel working with Covid 19 patients in ICU’s with inadequate PPE was “not pretty.” Unemployment skyrocketing to at least 15 percent in the United States was “not pretty.” Peaceful protestors, challenging racism, being tear-gassed, or rioters derailing a protest and destroying property was “not pretty.” Gun violence, hunger, Covid 19 deaths in nursing homes, racism and other prejudices, political divisiveness, all of it is “not pretty.” In fact, nearly everything that shows up in the news is “not pretty.” Some would say that 2020 itself has not been pretty.

Such times, unfortunately, are a reality of being imperfect people in an imperfect world. That is why the strong words of today’s Gospel lesson are important for us to hear.

Let’s begin by backing up in Matthew 10, to last week’s Gospel lesson, in which Jesus summoned his 12 disciples, all of whom are named in the text, and gave them the ability to cure sickness and cast out unclean spirits. They have a hopeful message to proclaim as they go out to the surrounding area, “The kingdom of heaven has come near;” through them, healing will transforms lives. Jesus tells them they are to take no extra money, food, or clothing, but trust that God will see that their needs are met. And, they are to go in peace, not getting into altercations, but simply moving on if their good news is not received, not staying where they are not welcomed.

But, then, in verse 16, the tone changes: Jesus says, “See, I am sending you out like sheep in the midst of wolves….” They will be arrested, beaten up, hated; persecution will be the name of the game. The only positive note is that when they are handed over to be interrogated and flogged by Councils and Governors, they are not to worry about what they will say, because the Holy Spirit will speak through them.

Then, after all that, we come to today’s reading, which begins with these unlikely words, “So have no fear of them…,” yeah, right!?!

Earlier in chapter 10, Jesus says that families will betray one another to death, which is why in today’s reading, Jesus announces that he has not come to bring peace to the earth, but a sword, as families turn on one another. May I just say - it is NOT pretty.

Still, the followers of Jesus are to be the ones who bring the good news into the light of day and proclaim it for all to hear. Jesus has not come to keep the peace by maintaining the status quo. Instead, he creates a new peace between God and humans and humanity with on another, so that we see others in the way God sees us, cherished (like the sparrows) and counted (like the hairs on our heads).

We then take up the cross of suffering and sacrifice for the sake of the other. Jesus’ disciples, including us, are to live beyond fear. That’s possible, I think, only when being a follower of Jesus has the primary claim on our identity, rather than our roles as spouses, parents, siblings, children, friends, employer or employee, sports participant or enthusiast, and whatever else is important to us.

Let me say that again: we can take up the cross of suffering and sacrifice for the sake of the other and live beyond fear only when being a follower of Jesus has the primary claim on our identity. Of course, none of us will perfectly claim that identity, but by the power of the Holy Spirit, that is the direction in which we strive to move.

Whether it is the first or the 21st century, these words ring true, and challenge us, especially as racism once again rears its ugly head. Commentator Karoline Lewis noted in her article, “Do Not Be Afraid,” that in 2016 actor Will Smith was quoted as saying, “Racism is not getting worse, it’s getting filmed,” to which she responded, “Who could have imagined how true these prophetic words would become? Things are not worse; they are getting uncovered and the truth is almost unbearable to speak. For far too long, we have denied racism – and when I use these first-person plural pronouns, I am not referring to the United States in which I live, or global racism, I mean the church and its leaders.” (1)

OUCH! That is not pretty. Sometimes the covering gets ripped off, as was the case with George Floyd’s death this summer, or that Wednesday evening five years ago in Charleston, S.C. when nine people were murdered while welcoming a stranger for Bible study.

As part of the 2019 ELCA Churchwide Assembly, voting members adopted a resolution designating June 17 as a commemoration of the martyrdom of the Emanuel 9—killed at the African Methodist Episcopal Church that night. A “Confessional Litany and Lament” for the observance of that tragedy begins in this way:

“They were doing what we are called to as they engaged in bible study. It was Wednesday night— a stranger walked in, and these people welcomed him and prayed together: the Rev. Sharonda Coleman-Singleton, Cynthia Marie Graham Hurd, Susie Jackson, Ethel Lee Lance, the Rev. DePayne Middleton-Doctor, Tywanza Kibwe Diop Sanders, the Rev. Daniel Lee Simmons, the Rev. Myra Singleton Quarles Thompson, and the honorable state senator and pastor of the church, the Rev. Clementa C. Pinckney.

“This stranger wanted to ignite a “race war,” he said, after he shot and killed them, denying them the very humanity he claimed for himself, claiming rights and privileges associated with “whiteness.”

“Now we are grieved, once again in pain, burning and anguished, lamenting the horror of evil unleashed. And, so, we cry out, “Have mercy, O God, have mercy on us”.

The litany ends with these prayers: “Open our eyes, O God, open our hearts. Open our ears, O God, open our minds. Help us to behold one another as you behold us. Help us to be more firmly rooted in the practices of the gospel—so that, when we pray, the way we live will make real the dream of your beloved community within and among us. With the help of your mercy and grace, lead us to think, believe, and change. May your gospel’s transforming power by the working of the Holy Spirit be present in us, in our churches, in our nation and all the nations of the earth.  May it be so. And the people said, “Amen.” Amen”.

In verse 26 of today’s reading, Jesus said, “So have no fear of them; for nothing is covered up that will not be uncovered, and nothing secret that will not become known.” The sin of racism is being uncovered, but it is a treacherously slow uncovering. Since, as Ibram X. Kendi once wrote, “The heartbeat of racism is denial, the heartbeat of anti-racism is confession. Being an anti-racist requires, he says, persistent self-awareness, constant self-criticism and regular self-examination.” (3)

Are we brave enough to face that much honesty? We cannot do it alone, but if we strive for Jesus to have the primary claim on our identity, there’s hope, hope that we will set aside fear and allow truth to come to light. Where racism is harbored in our lives and church, it must be rooted out and dealt with; it is not pretty, of course, but healing often isn’t pleasant, just necessary, for the sake of the world God loves. AMEN