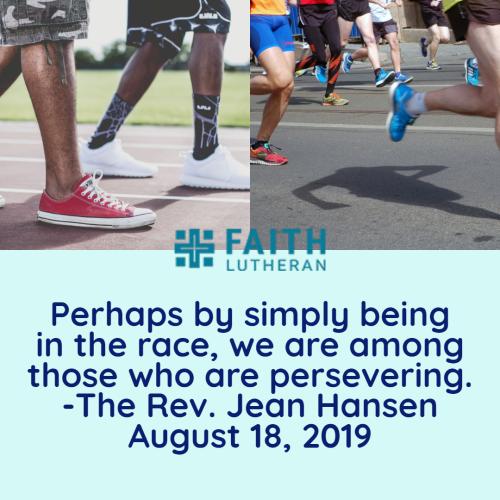 I don’t run, but I do walk. Sometimes I walk long distances, as was the case on July 4 when I walked – with a friend – a little more than 12 miles. Most of it was on country roads, up and down modest hills, with trees along the side providing shade. There was even a breeze. That was the case for about nine miles, and then the trees and the breeze disappeared.

The sun climbed high in the sky and our water supply began to dwindle. It was hot, hot, hot. Sweat was smearing my sunglasses and the destination seemed to be getting further away rather than closer. In order to put my suffering in perspective, I made myself think about the books I’ve read that describe how, as WW II was ending, weak, skeletal concentration camp survivors were forced to walk hundreds of miles without food or shoes. (At least I could pull an apple out of my backpack.) Finally, a road sign pointing the way appeared in the distance and I felt like I could only take the next step by keeping my eyes on that sign.

All this came to mind this week when I read, “…let us run with perseverance the race that is set before us, looking to Jesus, the pioneer and perfecter of our faith….” Sometimes the “race” of faith is like a 12-mile walk on a hot summer day; we need to look ahead and focus on our guide in order to keep going.

Today we are again focused on the Book of Hebrews, from which we read last week that “faith is the assurance of things hoped for, the conviction of things not seen.” In this section of Hebrews, the author names a host of Biblical characters who are examples of faithfulness; they responded to not just what they saw, but what they believed God wanted them to do. They trusted that God’s promise would be fulfilled, even though it hadn’t happened yet.

Be like them, writes the encourager of the Christians who are reading this letter. And, did they ever need encouragement! Scholars identify them as Jewish Christians who faced significant persecution, including the confiscation of their property, imprisonment, public insults, and the discontinuation of their gatherings due to fear of the authorities. All this was occurring, it is surmised, shortly before the destruction by Rome of the temple in Jerusalem in 70 AD. No doubt, the believers were tempted to deny their faith and “shrink back” into the shadows. So, the author of Hebrews encourages the readers to “draw near” to “persevere in full assurance of faith” and “unswerving hope” (10:22, 23). And, they are exhorted to imitate the faith of those who have gone before them. (1)

The interesting thing, though, is that those who are listed as examples of faithfulness have, we might say today, “issues.” Or, as commentator Doug Bratt notes, “they have more than a few moral warts and wrinkles.” (2)

Among those listed earlier in the reading are Sarah and Abraham who, when God’s promise was slow to be fulfilled, constantly took matters into their own hands rather than trusting God. There’s Jacob who swindled his brother out of his birthright and tricked their father. Today we read the names of Gideon, who was a reluctant warrior, and asked for proof that it was God who was speaking to him. Or, there’s Jephthah who traded the life of his only child for a military victory. And what about David, the nation of Israel’s greatest King, who committed adultery and arranged for the death of Bathsheba’s husband. Rahab is a favorite of mine; she was smart and faithful, but also was a prostitute.

In other words, as is noted by blogger Pastor Janet Hunt, those who are named as examples of faithfulness are far from perfect. In fact, she says, some of them stumble and fall in rather remarkable ways. Could this be to encourage us, regardless of our strengths, our weaknesses, our successes, our failures, our moral stature or our moral failings, to simply get in the race and trust that God will take care of what it means to win? Perhaps by simply being in the race, we are among those who are persevering. (3)

These imperfect heroes also remind us that it is Jesus, not them, on whom we must focus as we run the race of life and of faith. As we slog along, we keep our eyes on the ultimate runner, the one who created the race of faith and the only one to reach its perfect end.

I have a friend in Nebraska who runs marathons, so I’ve encouraged him to give the Akron Marathon a try. He checked it out a few years ago when Sandrun Hill was on the course and decided it was not on his list of desired challenges.

Running the race of faith is something like that, in the midst of day-to-day challenges (and joys), we are called upon to run a race of loving, of forgiving, of showing compassion, of advocating for the disadvantaged, of accepting the excluded, and of being courageous. And, that’s the shortlist. It’s an uphill climb that we can choose, or not. But if we do, then keeping our eyes on Jesus is what keeps us going. Faith and perseverance are required.

Bishop Michael Curry calls it “gambling on God.” By the way, if that name sounds familiar; it’s because he’s the American Episcopal Bishop who presided at the royal wedding in England a year or so ago. I’m not sure how the pilots in the congregation will feel about his metaphor but listen to what he has to say:

“The only way to follow Jesus is by faith. And that’s not easy because in a very real sense you know that if you do that, you’ve got to gamble on God. I gamble a lot. I don’t mean in a casino. I gamble every time I get on an airplane. I don’t particularly enjoy flying; I do it because I have to and I know it’s reasonably safe. But the truth is that when I get on a plane, I don’t usually look in the cockpit to actually see if anybody is there. I pretty much take it on faith that there’s a pilot or two pilots in the cockpit.

“Sometimes the pilot speaks before you take off, and sometimes not. Sometimes you never hear from the pilots at all. And, yet, we all get on the plane and actually trust that there’s a pilot flying that plane and that the pilot is in relatively good shape and should be flying the plane. Have I had any proof that that’s the case? Not one iota. Have I had any shred of evidence that that’s the case? Not one shred of evidence. And, yet, I get on a plane and let someone take me up to 34,000 feet, somebody I have never seen and sometimes somebody I have never heard from.

Now, if I can have faith in all of our airlines, and I don’t really have any evidence in my hands that they know what they are doing, why is it so tough for me to have faith in the Lord God, Almighty?” (4) That’s a good question, isn’t it?

“Faith is the conviction of things hoped for, the assurance of things not seen.” Often, when we are running the race of life, and of faith, we struggle to run it in the way Jesus taught us and we do not know what is around the corner, but we do know who is in the lead. So, “let us run with perseverance the race that is set before us, looking to Jesus the author and perfecter of our faith.” AMEN