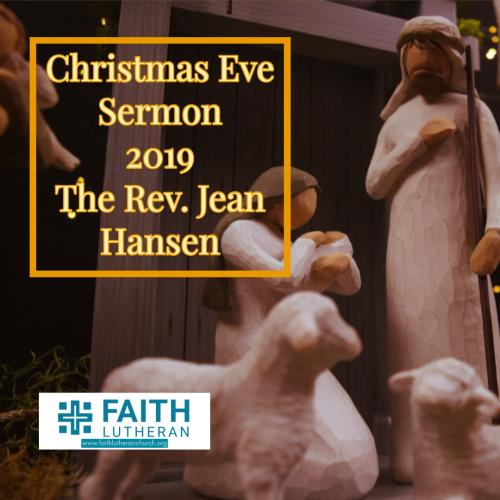 Well...that was unexpected, wasn’t it? Oh...I’m not referring to the story of Jesus’ birth I just read; you expected to hear that. What you may have never experienced is 1 Corinthians 13 being read on Christmas Eve. You’ve heard it most often at weddings, sometimes at funerals, once every few years in Sunday morning worship service, but usually not on Christmas Eve or during the Christmas season.

But this year, here at Faith Lutheran Church, 1 Corinthians 13 in its entirety will be read between today and Jan. 5, the 12-days of Christmas. That’s because it’s only appropriate that we reflect on “The Love Chapter” of the Bible as we consider that Love Came Down when Jesus was born.

So, we begin on this Christmas Eve by reflecting on the pivotal role of love, which is stated so clearly in the first three verses of 1 Corinthians 13. The Apostle Paul wrote this letter to the newly formed Christian Church in Corinth, where there’s a conflict concerning how to live out one’s faith in a corrupt environment. Also, some of the church members brag that certain spiritual gifts make them “better Christians” than others.

Given that, writes Sinclair B. Ferguson in his book Love came Down at Christmas, Paul is telling his readers that their ability to speak “in various kinds of tongues,” which they might have viewed as the language of angels, is nothing but an annoyance without love. The Apostle writes, “If I speak in the tongues of mortals and of angels, but do not have love, I am a noisy gong or a clanging cymbal.” In other words, they act and sound like a brass instrument making a loud, unpleasant noise if arrogance, not love, backs up their actions.

And, while the ability to prophesy was a big deal in Corinth, a loveless prophet is nothing, and mountain-moving, self-serving faith, faith without love, falls in the same worthless category. He continues, “And if I have prophetic powers, and understand all mysteries and all knowledge, and if I have all faith so as to move mountains, but do not have love, I am nothing.” That’s because, writes Dr. Ferguson, having special gifts, even extraordinary ones, is a mark of grace only if it used to express love for God by serving others.

Finally, even suffering the loss of all things, including one’s life in horrific circumstances, has no positive impact if love for Jesus that produces love for others is lacking. “If I give away all my possessions, and if I hand over my body so that I may boast, but do not have love, I gain nothing.”

Sacrificial love is the “value- giver” to all our actions, no matter how impressive or honorable they seem to be. All this is true because of what we are celebrating today; the message of Christmas is that Jesus came because he loved us. The one who was present as the world was created, who basked in glory and perfection, came to live among us, sacrificing everything. Love came down. (1)

This is a concept that we struggle to grasp. Way back in the 1500’s, in a Christmas Eve sermon, Martin Luther called it the Divine Exchange. His theological concept reflected Roman law about marriage in which there were two ways of acknowledging property rights. One was that someone owned a thing, and the other was that someone else was entitled to full use of that thing. So, when people were married, each retained what each previously owned, but also had full rights to use what the other owned. It wasn’t necessarily a fair proposition.

The way commentator Dr. David Lose describes it is this: it would be as if, when he and his wife were married, he drove a base model VW Jetta on its last legs/wheels (which, evidently, was the case), but she owned a luxurious, new BMW (which wasn’t the case but works for the illustration). According to Roman property law, once married, he had full use of that beautiful BMW as if he was his; she could not legally prevent it. And, she could drive the Jetta whenever she pleased as if it belonged to her. Obviously, one of them got a better deal!

Well, Martin Luther writes that that’s what happened when God came to the world in human form, as a baby named Jesus (the incarnation). Let me quote Dr. Lose as he explains what Luther meant: “God is joined to us fully and completely in the (flesh of the birth of the) Christ child and thereby takes on our life – our hopes and dreams, faults and sins, ups and downs – and gives us Christ’s own righteousness.” Just think of that, the righteousness is Christ’s, but we make full use of it so that when God looks at us, writes Dr. Lose, God sees us as fully righteous and pure as Christ. (2)

If that explanation doesn’t click for you, then think of it this way - in Jesus, we are given grace upon grace; the full extent of love that’s possible came down. Or, as St. Athanasius was quoted as saying: “Christ became like us so that we might become like Christ.” His love is the value-giver; it gives value to humanity … to us. Love came down.

So, let’s look again at 1 Corinthians 13:1-3; I invite you to read it out-loud with me and to join me in replacing the words “love” with the name “Jesus” because he is THE representative of love. “If I speak in the tongues of mortals and of angels, but I do not have Jesus, I am a noisy gong or a clanging cymbal. And if I have prophetic powers, and understand all knowledge, and If I have all faith, so as to remove mountains, but do not have Jesus, I am nothing. If I give away all my possessions, and If I hand over my body so that I may boast, but do not have Jesus I again nothing.” But we have Jesus, so we have gained it all. AMEN