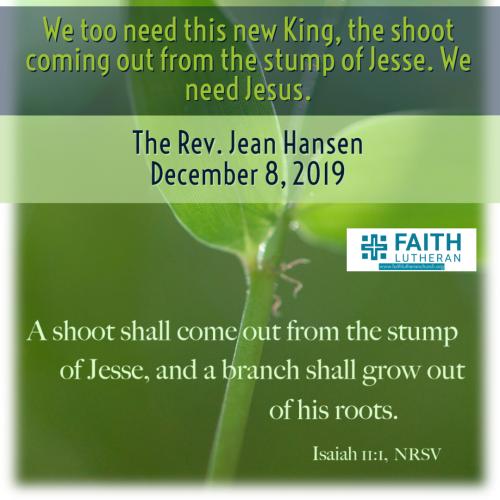 It was Advent a year ago, I think, that I was accused of enjoying reading one particular part of today’s Gospel lesson just a bit too much: “You brood of vipers! Who warned you to flee from the wrath to come!” Why that accusation was put forth I do not know, do you?

Well, to avoid such observations this year, I decided to focus again on the proclamations of the Prophet Isaiah. Last Sunday, we read Isaiah’s God-given vision of a world in which weapons are transformed into implements for producing food, and war is learned no more. I listed a number of places in the world where war/violence prevails, a reminder that we still need to hear Prophet Isaiah calling us to live into his vision.

Today, I want to focus first on, you guessed it, the context for the much-quoted and illustrated words and images of Isaiah 11. Which, like Chapter 2, promises a day when there will be justice and peace on earth.

In the 8th century BCE, the northern Kingdom of Israel has been dismantled and the people deported; Judah in the south was being threatened by Assyria. In describing the situation, Pastor Stephen Montgomery says that although Isaiah’s words have a poetic ring to them. Isaiah was not watching a dazzling sunset, but rather the dazzling swords of the overpowering Assyrian army as it overran his homeland, Palestine, leaving behind a trail of agony.

Now, that description may be a bit dramatic, but the fact is that they needed help, the kings of Judah had hardly been worth the title “king.” What was required is a new leader who will initiate a new time. And, so it was that Isaiah proclaimed, “A shoot shall come out from the stump of Jesse, and a branch shall grow out of his roots.”

Let’s pause here for just a moment and think about the qualities of a leader; what traits would make sense in a challenging time, like that which was being faced by Isaiah’s people? Would strength or compassion, toughness or tenderness, intellectual or emotional intelligence be desired? Would experience be important? What about character or political savvy? Whose interests should a leader pursue? Should the leader be thoughtful or charismatic? Is righteousness an issue?

Now, let’s see what the characteristics were of the leader of Isaiah’s vision. This King would be a direct descendant of King David, but a new and better version, one on whom the Spirit of God will rest – the spirit of wisdom and understanding, the spirit of counsel and might, the spirit of knowledge and fear of the Lord.

This King will fulfill the words of Psalm 72, which we also read today, and rule the people righteously and with justice, defending the needy.

Old Testament scholar John Holbert notes that this new King will not rely on traditional ways of judgment, but will go far beyond his predecessors, bending over backward on behalf of the poor and the meek, making certain justice is offered to them, despite those who would deny it to them. This new King will come not with sword and shield, but with words strong enough, and profound enough, to make ineffective any who would stand in his way. This new King will be encircled with righteousness and justice, like a belt.

And, with this new King’s coming, the creation itself will be transformed. Animals that are natural enemies will live together in peace and contentment. The universe will change; God’s plan for the cosmos is peace, harmony, and beauty, and it will be fulfilled. (2)

It’s a beautiful vision, but is it an option for us in even the most minor of ways? Commentator Stacey Nalean-Carlson writes that for us, it might be more surprising to see a wolf live with a lamb than to see elected officials work together for the common good and divided Christians cease their infighting. It might be less surprising to see the leopard lie down with the kid than to see broken families get along. We too need this new King, the shoot coming out from the stump of Jesse. We need Jesus. (3)

It’s not surprising that we see Jesus in the Prophet’s description of the new King; who else, but Jesus was the champion of justice, the defender of the poor and meek? His words stopped his enemies in their tracks. His righteousness did not waver. And, the universe was transformed when life conquered death through him.

We believe that one day, the transformed cosmos will be a reality; who knows if it will be the peaceable kingdom that Isaiah imagined? But in the meantime, as disciples of Jesus, we strive to follow him in our day-to-day lives, living as if we too are encircled with righteousness and faithfulness.

If the description of the characteristics of a spirit-filled leader sounded familiar, it’s because whenever a baptism is done we pray that the baptized will be filled with the spirit of wisdom and understanding, the spirit of counsel and might, the spirit of knowledge and the fear of the Lord, and spirit of joy in God’s presence.

As we develop those gifts, we too will be leaders of the highest degree, regardless of where we are called to serve – at home, at school, at work, at church, or in the community where we live.  We can live into Isaiah’s vision and make a difference. During Advent, we prepare to celebrate Jesus’ first arrival and we look forward to his return. In a world full of injustice and strife, Isaiah’s words are nothing but good news of a new day that is both a present, although incomplete, and future, perfect reality. AMEN