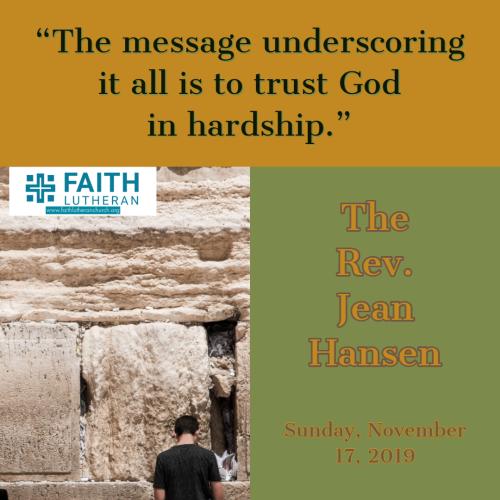 Once Upon a Time...We Endure

If I begin a story with, “Once upon a time…” it would be an indication that what I’m about to tell you is a Fairy or Folk Tale or a Fable. That’s an interesting type of literature; when I was age 4, the book I received containing such accounts was filled with complicated sentences and long paragraphs, fanciful images, but also characters and ideas that were just plain frightening. And, of course, there was also a moral or message to the story.

I still have that book titled Stories that Never Grow Old. When I look at it I wonder what world-view I acquired from those tales. Surely, I grasped the concept of make-believe versus reality? It’s important to apply that understanding as we read today’s Gospel lesson, although it’s not quite as clear as in a Fairly Tale with talking goats and trolls.

First, let’s think about the setting for the Gospel; Jesus is in Jerusalem, what we call the “Palm Sunday Parade” has just occurred and his crucifixion is near. He’s in the Temple, where he has pointed out a poor widow who gave all she had in spite of her poverty. Some of those with him begin to admire the Temple and its beauty.

It seems as though Jesus wants to draw their attention elsewhere, perhaps to the impermanence of human achievement or the inevitability of facing challenges in this life. So, he begins using the language of apocalyptic literature, which to first-century ears would have been somewhat like saying, “Once upon a time,” or “listen for the moral of the story.” He is conveying a message that the faithful should trust in God when facing the most challenging of circumstances, like, for example, wars and insurrections, earthquakes, famines, plagues, and also persecution. Jesus isn’t describing a specific set of calamities; his words are not to be taken as a prediction. Every age has its false prophets, wars, natural disasters; believers have faced hostility and rejection in every century.

It’s true, though, that this was a particular reality for Christians who first read Luke’s gospel. To them, and to us all, the message is: don’t be terrified; don’t follow unreliable people. Instead, trust that God is present; the message is that we can be assured of God’s faithfulness. In fact, God will provide both words and wisdom for speaking out in such circumstances. The message underscoring it all is to trust God in hardship.

“All will be thrown down,” Jesus says in reference to the Temple, which was reality by the time these words were written down. A way for us to think about it is this, we all go through times of “tearing down” in our lives. Listen to this description by the Rev. Samuel Chandler, “Jesus knew that the temple’s destruction would not mean the end of God’s creation; it would not mean the end of salvation. So, he urged people to bear suffering with hope and patience. His lesson was that all of us suffer, and all of us go through destruction and tearing down. All of us even go through death, but that is not the end. He died himself, but it was not the end. He was resurrected, and God’s creative power began again.” (1)

In other words, while the literal stones will all be thrown down, in some way or another, at some time or another, the spiritual stones will endure. Instead of thinking in terms of the end of the world when we read this part of Luke, consider the fact that stages of our life end sometimes, wrote Pastor Chandler. “We think it’s the end of the world. But it’s not the end of the entire world. Just the end of that particular stage of our world. We enter a new one. Sometimes the transition hurts. Changes hurt. But they are signs that the kingdom of God is near, is very near. When you are encountering the anxiety of any change in your life, be assured that you are not far from God in that experience. You are, instead, very near.” (2)

We all know the reality of this – for our own lives, for family and friends, for our fellow congregation members. The testimony that God gives us the wisdom and the words to proclaim is not just to those who scoff at being a person of faith, but to each other.

It’s easy to lose track of that reality in our digital world. I’ve read more than one article about how lack of one-on-one contact between people is creating many societal challenges, including people’s inability to greet and meet one another in person. But that’s just the tip of the iceberg that leads to loneliness, lack of physical and psychological support and the inability to put problems in perspective.

I noticed something interesting when I read a story in the November edition of “Living Lutheran” about the Lutheran Lakota Shared Ministries which is based in Pine Ridge South Dakota. The focus for visiting volunteer teams has changed in recent years; they used to come to do service projects on the reservation, but that is no longer the emphasis.

While there still are element of service, the primary focus for youth and others who come to the reservation is learning and listening to that native people’s stories, getting to know one another, sharing time together, and sharing meals. The goal is for visitors to gain a new perspective and become allies with the Lakota people. (3) In other words, serving – or perhaps I should say supporting - is about relationship.

And relationships are the setting for the “testimony” that God gives us the words and wisdom to share in the face of the “tearing down” that is such a reality in our lives and the lives of those around us. To be in relationship, whether that is among each other or with those beyond our church walls, requires intentionality. And, relationship, with God and with one another, is what makes enduring possible.

So, take advantage of opportunities to grow in faith and make connections with others, especially in this faith community. Then, when you face a changing stage of life, a message of hope can readily come to you. The “moral” of today’s Gospel is actually not complicated, even if the words are a bit overwhelming: God is with us in difficulty; God will help us endure, and we will gain our souls. AMEN