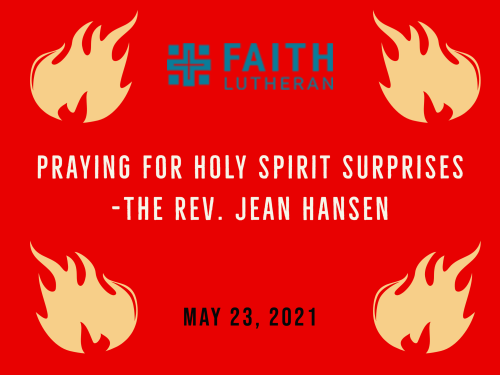 Fifty days ago, we celebrated the resurrection of Jesus; 10 days ago was the official observance of the Ascension of our Lord, and today is the Day of Pentecost when we remember the outpouring of the Holy Spirit on the first followers of Jesus.

It is a day for wearing red, the color that reminds us of the flames that rested on each believer, a visual representation of the Holy Spirit. This also is the day one hopes not to be assigned as a scripture reader, given that long list of nations represented by devout Jews living in Jerusalem. Jerry Allen did a great job with that text today, but I could not help thinking of a Facebook post by an ELCA pastor as Jerry read.

It seems that in the congregation where that pastor served, the lector began reading the list in Acts 2 – “Parthians, Medes” … and the said, “and a whole lot of other countries you can read for yourselves in the bulletin.” HA!

That is tempting, but it also lessens the impact of one of the significant details of this day – that the followers of Jesus were given the ability to declare the Good News in the languages of nations which, at that time, represented every part of the known world. And that is just one of the astounding events of the day.

The band of believers, having watched their resurrected Lord depart, have been waiting for the “promise of the Father,” as Jesus told them to do. I doubt they had any idea what to expect. Still, when the Holy Spirit finally shows up, nothing is usual about it. They were startled by a sound “like the rush of a violent wind”; tongues as of fire (real fire?) danced above their heads and suddenly, they were speaking languages they had never before spoken.

One commentator describes it as a “fear-inducing, adrenalin-pumping, wind-tossed, fire-singed, smoke-filled turmoil of an experience.” (1) No wonder the crowd that gathered, having heard their native languages being spoken by non-natives, were not just astonished and amazed but, to more accurately translate the text, “confused, in an uproar, beside themselves, undone, blown away, thoroughly disoriented and completely uncomprehending. (2)

It is a party like none other! I say that because this event is often called the birthday of the Christian church. The Holy Spirit is now on the move; the Advocate and Comforter has arrived. The Greek word referring to the Holy Spirit, usually translated Advocate or Comforter, literally means “the one who comes alongside,” like a calming presence. Yet, the way the Holy Spirit first arrived was not calming; it was life-shaking. In this case, the Holy Spirit came alongside to give courage for the daunting work of proclaiming the Good News in word and deed.

And, indeed, before that day was over, more than a few amazing things had happened. I like the way that Barbara Brown Taylor describes it. I’ll quote her: “…the church had grown from 120 to more than 3000. Shy people had become bold, scared people had become gutsy and lost people had found a sure sense of direction. Disciples who had not believed themselves capable of tying their own sandals without Jesus discovered abilities within themselves they never knew they had. When they opened their mouths to speak, they sounded like Jesus. When they laid their hands upon the sick, it was as if Jesus had touched them. In short order they were doing things they had never seen anyone but him do, and there was no explanation for it, except that they had dared to inhale on the day of Pentecost.” (3)

The question is this; does the Holy Spirit still work among us, if not like that, in other ways? Certainly! Listen to this description by Pastor David Lose about the Spirit’s activity. “The Spirit doesn’t solve our problems, but invites us to see possibilities we would not have seen otherwise. Rather than move out in fear, the Spirit grants us courage to move forward. Rather than promise safety, the Spirit promises God’s presence. Rather than remove us from a turbulent world, or even settle the turbulence, the Spirit enables us to keep our footing amid the tremors.” (4)

On this Pentecost, we are celebrating the Affirmation of Baptism (Confirmation) of Anna, Lankika, and Carter. This is usually an event observed on Reformation Sunday, but it was postponed last year due to the pandemic. So here we are, on Pentecost, reminding these young people and everyone else that the Holy Spirit still shows up – a gift of baptism that is acknowledged in this Affirmation of Baptism.

I suppose that “stirring up” will be less earth-shaking than what happened that first Pentecost, although wouldn’t it be exciting if tongues of fire appear and new languages are spoken? (Direct comments to youth.) No?? Well, then, perhaps more noteworthy is this - the Holy Spirit WILL empower you as you strive to fulfill the promises made just before the laying on of hands, which are:

to live among God’s faithful people,

to hear the word of God and share in the Lord’s supper,

to proclaim the good news of God in Christ through word and deed,

to serve all people, following the example of Jesus and

to strive for justice and peace throughout the world.

Doing any of that requires the Holy Spirit’s help, but your choice to try to do so is vital too. But, if your willingness and openness are combined with the Holy Spirit’s presence, astounding things can happen. If you find that hard to believe, just ask one of your sisters or brothers in Christ in this room – especially the seasoned ones – how that has happened for them since they were age 15.

If they mull it over, and you listen, there will be stories of astounding events not that far removed from speaking languages not previously spoken to proclaim the Good News of Jesus. Ask if the Holy Spirit has shown up for them, and you’ll have multiple examples of varied ways the Holy Spirit still is on the move in the lives of the faithful.

Like the disciples, none of us have any idea what to expect when the Holy Spirit shows up. If we pay attention, we’ll notice again and again that there is nothing usual about what happens next. In fact, that is my prayer for each of you – lots of Holy Spirit surprises. AMEN