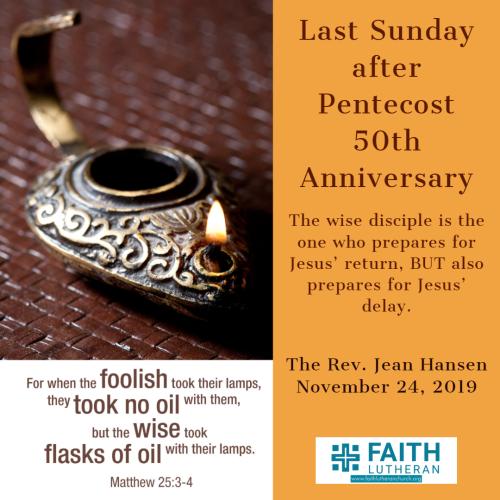 Preparing for the Delay

Fifty years! For those of you who were here on November 23, 1969, and there are a few such people, it may not seem that long ago when Sunday worship was held in this space for the first time. Actually, though, that was not the first service since the day before Mary Anne and Roger Pritt were married here. That event was celebrated here yesterday, and its planning alerted me to this anniversary.

Evidently that first Sunday service, which we have duplicated parts of today, was not a day of celebration, although I imagine there was more than one sigh of relief to be in the new building. It seems that the congregation continued to put finishing touches on the sanctuary and had a dedication in January of 1970, and a blessing of the organ about a month later. The cost of this structure was $645,000.

That was a different era for churches, although the peak of church growth in the United States was 20 years earlier, in 1950. This congregation, St. Hilary next door, Fairlawn Lutheran down the street, were all founded in the mid-1950s (Faith in 1954), and Faith’s initial two buildings were constructed on this site in 1959 and 1963. In 1952 St. John Lutheran Church – which was home for some of you - was embarking on adding a large addition for education and fellowship purposes. America was in an expansion mode then, and the church was included.

But, by the time the dedication of this sanctuary was held in 1970, societal change was already impacting organized religion. Then, the percentage of Americans who belonged to church had already been declining for 20 years, and the percentage of those who actually participate in church has been declining even faster. Data provided by churches in 2017 indicate that on a typical Sunday morning 12 to 16 percent of Americans attend worship. (1)

Beautiful sanctuaries like this one, or the one at St. John/St. Paul, are a gift of the past. When new churches are built, they do not look like this, or Holy Trinity downtown, or the huge and intricate cathedrals of Europe that many of us have visited as tourist attractions. We gaze at the vaulted ceilings, the stained glass and the carved wood and are amazed that such construction could have occurred more than 500 years ago.

It’s good, I think, to pause and reflect on what was, to appreciate the sacrifice that created it and be thankful for places – this one particularly – where God is praised. And, then, we move on … another congregational meeting, a budget to consider, a group of faithful leaders to elect and the opportunity to consider new ways to, as our new Mission Statement proclaims: Worship God! Grow in Faith! Offer Hope!

We can learn something from the bridesmaid parable of today’s Gospel lesson. (By the way, there’s a church in Erfurt, Germany where the wise and foolish bridesmaids are depicted in wonderful life-size statuary near the entryway. Their facial expressions are priceless.) So, back to the parable; in it there was two set of bridesmaids, five described as wise and five as foolish. Their situation is the same except for one thing: they all take their lamps to meet the bridegroom; they all took a nap when the bridegroom was delayed; they all woke up to greet him and trimmed their lamps, preparing to do so. The difference was that those called foolish took no oil with them, and their lamps were going out due to lack of oil, while the wise ones had extra oil.

Now, this would not have mattered if the bridegroom had arrived on time; they all would have had enough oil in their lamps to light his way to the wedding banquet. But, he was delayed, and that meant that one group missed the bridegroom’s arrival because they went to buy oil. Remember, it’s a parable, so there is a moral or message to the story; what is it?

The wise disciple is the one who prepares for Jesus’ return, BUT also prepares for Jesus’ delay. The wait may be unpredictable, which is something we understand since it’s 2000+ years since this story was told, and we are still waiting. Wise disciples remain faithful while waiting, but not only faithful – flexible, creative, thoughtful and trusting. We keep the vision of Christ’s return – and the restoration of God’s perfect kingdom – alive. To do that, we have to be ready for the wait, and who knows what that will bring?

It may mean adding a contemporary service, combining with another congregation, expanding outreach and developing new ways of connecting in this electronic world. Also, we look for ways that Jesus shows up while we wait for his final entrance.

We keep alert for the ways Jesus enters our present, as well as preparing for his ultimate arrival.  I like to ponder verse 8 of today’s second reading, “But do not ignore this one fact, beloved, that with the Lord one day is like a thousand years, and a thousand years are like one day.” In other words, we think the wait for Jesus’ return has been long, but by God’s timing it has been no time at all. So, we have the opportunity to be wise, to be prepared, in the midst of the delay.

Fifty years is no time at all! So while we give thanks for the past and its gifts to us, we also are challenged to consider new ways of sharing our faith and to develop activities/ministries that will bring positive results. There are two major things that must be true about this congregation if we are to be wise during this time of waiting.

One is that Faith Lutheran Church matters in our community and is actively participating in work that matters to God. The second is that this congregation is a place where spiritual lives are strengthened, deepened. In other words, those who are here, participating in congregational life, feel connected to God, and are aware of the connection between their life and the work of God. (3)

Today we celebrate this space, thankful for those who made it possible. But, we also think about who we are in the midst of a changing world, and how to prepare not just for Jesus’ return, but more importantly for his delay. AMEN