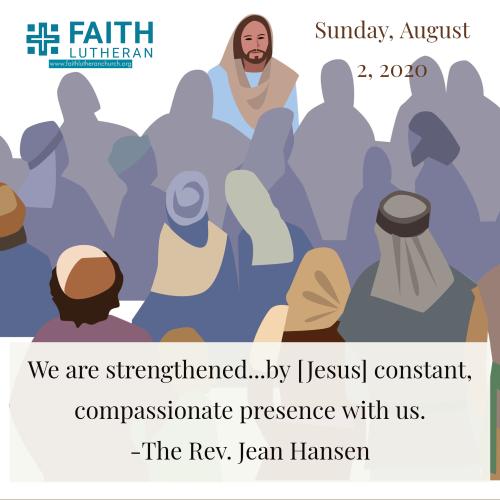 You probably have, in your life, pushed yourself to do something even though you do not quite feel up to it. That is a common reality for parents, especially single parents, who have children depending on them, or health care workers or teachers or all those who have no one to cover for them should they need a break.

How many meals do you suppose have been cooked, primarily by Moms, who, if they had their choice, would have cold cereal for supper? I have a friend, who after 40 years of planning and preparing meals for her family, was tired of it. When it was just her and her husband at home, and he continued to take her meal preparing for granted, she announced her retirement. Now she shops and cooks for herself only, and he is responsible for his own meals. Guess what? He is learning how to cook due to the pandemic and not wanting to eat out. Will wonders never cease! (Now, do not blame me if the cook at your house goes on strike tonight.)

ANYWAY…I guess that is a bit off the subject…the point is that we almost all push ourselves to act even when it is difficult to do so – that is even true of Jesus. We have heard the story in today’s Gospel lesson multiple times; it is the only miracle story found in all four Gospels, which indicates its importance. And, there are details in today’s account from Matthew that teach us about Jesus and give depth to the story. It is all about context.

Please look again at verse 13, “Now when Jesus heard (about the beheading of John the Baptist), he withdrew from there in a boat to a deserted place by himself.” Jesus had been given the tragic news of his cousin’s murder, not just death, but murder.

It is a grizzly story. King Herod had arrested and imprisoned John; Herod was angry because of John’s criticism of his lifestyle, particularly his relationship with his brother’s wife. We are told in Matthew 14 that although Herod wanted to put John to death, he was afraid to do so because the crowds regarded him as a prophet. But, in the midst of a party, when his stepdaughter’s provocative dancing led Herod to grant her a blank-check wish, at her mother’s prompting she chose the head of the Prophet on a platter. Herod complied.

It is one of those senseless events, an unfair end to an important man, but more than that, to someone Jesus loved. Can you imagine hearing that someone you loved died this way? So, we read, Jesus intends to withdraw privately to a desert-like place. He is hurting. He is grieving. Evil won the day. He wants to be alone with his thoughts and sorrows.

Instead, the crowds followed him on foot from the surrounding towns, and when Jesus came ashore, “he saw a great crowd, and he had compassion for them.” That Greek verb we translate “compassion” is an interesting word; it means a gut-wrenching, visceral emotion.

Commentator Rolf Jacobson points out that in the Gospels, this word is never simply an emotion; it is a deep emotion that moves Jesus or another to saving actions. “It moves the so-called Good Samaritan to save the beaten man. It moves Jesus to heal one man and raise a woman’s dead son. It moves a waiting father to have mercy on his prodigal son. Here the deep compassion that Jesus has on the great crowd moves him first to heal their sick, and then to feed the masses.” (1)

The context makes it clear, it seems to me, that Jesus did not feel quite up to it all on that day, but he acted anyway. An important, simple detail is that when the disciples were worried about the crowd becoming hungry as night fell in that deserted place - and perhaps were concerned for Jesus too, knowing the grief and pain he was carrying – Jesus did not send the people away. Let me say it again: he did not send the people away. Instead, he brings the Kingdom of Heaven – a place of healing, compassion, sharing and where there is more than enough for everyone – into the here and now.

Commentator Scott Hoezee writes that “maybe we need to see Jesus as the one with red-rimmed eyes and tear-stained cheeks and whose hands are trembling for the sorrow of it all. And yet out of his own scarcity, out of his own emotional train wreck, he manages to bring forth an abundance of life and joy”.  He goes on to say, “Jesus did this grand miracle by somehow reaching deep into himself to find the strength to go on in the face of so much that is wrong with this world, in the face of senselessness and disorientation.” (2)

I imagine that most of us, in recent months, have had to push ourselves to keep going; we have not been quite up to it, I’m thinking. There are, of course, the extreme examples of medical personnel, exhausted and emotionally drained, and yet pushing forward to care for Covid 19 patients. But, there also are those who battle decision fatigue as schools, businesses, and churches contemplate every choice, multiple times, as they attempt to fulfill their missions in a new way.

And, there’s the discouragement that comes with canceled plans, the unknown future, and the feeling that one step forward is being accompanied by two steps backward. People are lonely, bored, and just plain tired of it all.

Today it’s important to remember that Jesus came to transform the wilderness back into a life-giving place. Our Lord provides inspiration to follow him, to do as he did, to step out in faith even when, especially when, we are not quite up to it.

Just as was true of the thousands fed on that day long ago – we are strengthened by the life-giving bread he gives us and by his constant, compassionate presence with us. Jesus never sends us away or leaves us. So, my friends, push on. AMEN

(1) “The God Who Feels – and Feeds” by Rolf Jacobson, www.workingpreacher.org
(2) “Matthew 14:13-21” by Scott Hoezee, Center for Excellence in Preaching, cep.calvinseminary.edu 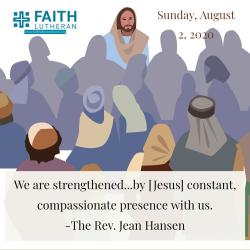