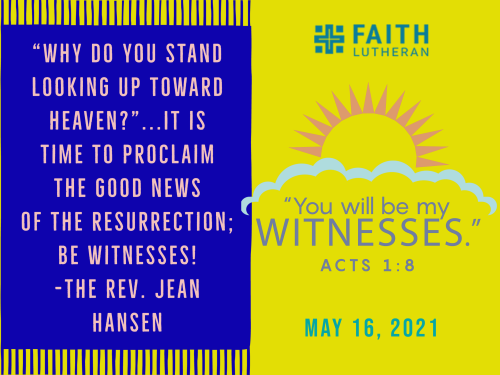 For weeks now, you have heard me say that it is still the Easter season; today is the last Sunday of what is sometimes called Eastertide. We celebrate the Ascension of our Lord, which actually was on Thursday, the 40th day of Easter.

Perhaps you do not particularly care about the rhythm of the church year, but for me, it marks the flow of winter into spring into summer. Easter leads us from celebrating the emergence of new life to the work of cultivation, nurturing, and growth, the theme of the Season of Pentecost, both in worship and in the garden.

So it is that in today’s readings, the disciples are being prepared to move from observing and celebrating to doing. For 40 days, the Risen Jesus has been with his followers, speaking to them about the Kingdom of God. He has been preparing them for the time they will no longer see him but must carry out his mission. That mission is clearly stated in verse 8; we talked about it two weeks ago: Jesus tells them, “But you will receive power when the Holy Spirit has come upon you; and you will be my witnesses in Jerusalem, in all Judea and Samaria, and to the ends of the earth.” Now, the time has come for his departure.

And, so, Jesus ascended in a cloud. Which in scripture is a sign of God’s presence, as well as a veil to hide that presence from on-lookers. As they were gazing up toward heaven, suddenly, two men in white robes stood by them.

Does that sound familiar? In Luke 24, we read how, 40 days earlier, the women disciples had gone to Jesus’ tomb and found it empty. The text says, “While they were perplexed about this, two men in dazzling clothes stood beside them,” and asked a startling question, “Why do you seek the living among the dead?” The answer seemed simple enough – because a dead man was placed here on Friday.

Well, the heavenly beings have returned; today’s startling question is, “Why do you stand looking up toward heaven?” Once again, the answer seems obvious – because Jesus is leaving; see, there are the soles of his feet! The message, though, is much the same as it was on that Sunday we now call the first Easter – get the show on the road! It is time to proclaim the good news of the resurrection; be witnesses!

Be witnesses? How is that possible when his followers are sad and afraid to see Jesus go? As one commentator reflects, perhaps they had not yet had time to grasp that being with Jesus does not mean being someplace other than where they are. Timothy Tennent, president of Asbury Seminary, writes that “Jesus did not just ascend from here to there. Because he ascended into the heavens, he ascended from here to everywhere.” Because he went to be with God, he went to be where God is, and God is everywhere. Jesus is everywhere he sent his disciples to be witnesses.” (1)

And not only is Jesus with them, but the Holy Spirit will also be in them. When the promised Holy Spirit arrives, so will their mission. The followers of Jesus will be transformed from passive spectators into active witnesses by the same Spirit, writes Pastor Barbara Lundblad, “that rested on Jesus at his baptism, the same Spirit that anointed Jesus to preach good news to the poor and freedom for the oppressed. This same “power from on high” was given to the disciples and by extension to us. This is a gift from beyond ourselves….” And, that Spirit will lead us where Jesus went, where others would not go. (He went) “to tables surrounded by odd companions, gathered children on his lap and questioned the disparities between wealthy and the poor.” (2)

I am constantly amazed at how people respond to that leading, sometimes not even realizing that the Spirit is at work. There is a column in the most recent edition of Christian Century, written by Isaac S. Villegas, titled “Emptying the Tombs.” In it, he tells how, several Easter seasons ago, he was asked by a friend to come to the jail in his town. He arrived to find that the sidewalk outside had been turned into a makeshift welcoming center with coffee, food, flower arrangements, and gift bags filled with toiletries, bus passes, snacks, and grocery vouchers. What was going on?

A local chapter of Southerners on New Ground (SONG) had raised thousands of dollars to pay the bail for black women to return home. When Pastor Villegas arrived, the SONG members were ready to “ransom from captivity all the women whose bail they could afford – to welcome them back to the community and back to their families.” But, first, the group wanted permission from the incarcerated women to pay their bond.

Pastor Villegas had already been vetted and granted visitation privileges at the jail. So, he was the one who met with the women and then reported their response to the crew outside. He remembers the first visit especially, in which he stood behind a large plexiglass window with a woman who was a stranger on the other side. Now I’ll quote him:

“’Hi, my name is Isaac,’ I said through the intercom. ‘There’s a group of people outside, and they sent me to let you know that they’ve raised money for your bail.’ She leaned toward the window, toward me. ‘What do you mean? How do you know how much I need?’

I reassured her that the women outside had the funds and were ready, if she was, to get her out that afternoon. ‘No way! Don’t play with me. You telling the truth?’ She covered her mouth with both hands.”

I love what happened next. Listen: “She shook her head in disbelief; the news was unthinkable, unimaginable. From her pocket she carefully unfolded a tattered scrap of paper and pressed it against the window for me to see. ‘I’ve prayed these verses everyday since I’ve been here,’ she said, showing me handwritten passages copied from Ephesians, Philippians and the Psalms. ‘I’ve been claiming God’s promises – and now you are telling me that Lord has broken the chains, that Jesus has set the captive free!’” As he left, Pastor Villegas heard her shouting, “Thank-you Jesus,” joy echoing down the concrete hallway.

As a sidebar, the column noted that $100,000 was raised to free 14 women and half of them had their charges dropped or dismissed. They had been incarcerated for weeks or months because they could not afford bail. (3)

Obviously, I do not know if those who raised the money believed in the Holy Spirit’s leading, but the woman whose story I told did, and so do I. There are many, many ways to be witnesses to the Good News of the Resurrection that we have focused on for 40 plus days. Pastor Villegas says that, to him, Easter looks and sounds like a celebration of life restored: resurrection is God’s protest against tombs, he writes. I would add that the Ascension is our reminder that we are sent to empty those tombs, the tombs of despair, of need, of loneliness, and of hopelessness in which people are trapped. So, let’s get the show on the road. AMEN