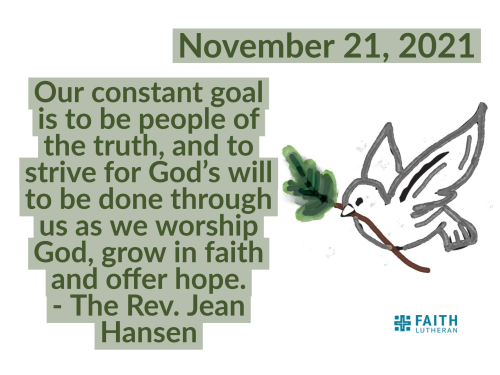 “Christ is the King! O friends, rejoice; brothers and sisters with one voice, let the world know he is your choice. Alleluia!” We sang those words this morning; I’m fairly certain that they also were sung at my ordination in 1988, although I’m not positive of that and it would take some effort to look it up. I’m particularly drawn to the first verse, which I just shared, and the fourth verse, “Let Loves all reconciling might your scattered companies unite in service to the God of light. Alleluia!” Both verses convey believers’ commitment to a united, serving faith family, workers in the kingdom of God.

That is somewhat confusing, though, because the kingdom of God often is viewed as not being of this world. How is it that Jesus is King, and what is his kingdom (or reign or realm)? That is the focus of today’s Gospel lesson.

It may be a bit confusing to attend worship on the last Sunday of the church year – Advent begins next week – and to hear a passage from the passion narrative in the Gospel of John, specifically, the trial of Jesus before Pontius Pilate. Have we skipped Thanksgiving, Christmas, Epiphany, Ash Wednesday, and Maundy Thursday? I already feel as if August, September, and October were lost, so perhaps it is part of a trend. The reason we read this passage today is that it helps us grasp what it means that Christ is our King.

We are given a peek into Jesus’ interrogation by Pilate; an interrogation implies that one person is more powerful than the other, but in this case, it is more of a collision of two kinds of power. In a sermon a Duke University Chapel Pastor Richard Lischer said that the interview went something like this:

“Pilate: Are you the king of the Jews?

Jesus: Whose idea is that? Surely not yours….

Pilate: Am I a Jew? Am I a deluded member of your religious sect?

Jesus: If I were your kind of king, you would have a fight on your hands. But I am another kind of king. My power has another source.

Pilate: (now fixated on the idea) So you are a king?

Pilate was looking for a king who wielded power as he did, with little mercy and significant violence that pervaded every part of the average Jew’s life. That’s obvious in the series, “The Chosen”, being shown and discussed here on Sunday afternoons. The Roman soldiers are a fear-producing, constant presence, and the taxes imposed by the Roman Empire cause unending suffering. Keeping people under the conqueror’s thumb, that’s how Pilate understood the role of king.

But Jesus did not live that way. Instead, writes Professor Frank A. Thomas, “The realm of God affirms what is good, true and just in every age, and it corrects what is misguided, unjust and wrong.” God’s realm is not a place, a race, an ethnicity, a version of the Christian faith, or a national or political entity. It also is not a simple thing to explain or to live. “It is a community in God’s care that lives in radical love, joy, peace, truth and righteousness”, says Professor Thomas, “This kingdom is the most beautiful and alluring thing in life, yet it is also the most demanding and radical thing one could ever know or do.” (2)

There are, of course, examples of kingdom living in our world as believers strive to follow Jesus in ways that seek the truth and often challenge the status quo. This summer I read a book titled, The Scandal of Redemption which is a compilation of sermons and writings of Oscar Romero.

That name may or may not be familiar to you; he was Archbishop of San Salvador, responsible for shepherding the Catholic Church in all of El Salvador. By the time he was murdered in 1980 he had become the outspoken advocate of its oppressed, poverty-stricken people. That is not, though, how he began his ministry. He was a parish priest and editor of the archdiocesan newspaper in the 1960’s but was not one of the radical priests of the era who were advocating economic reform. In fact, he was appointed Archbishop because the elites of El Salvador considered him “safe”

But, when his dear friend Father Rutilio Grande was killed by gunmen, henchmen of the government, Archbishop Romero made it clear that he would no longer distance himself from the kind of work Father Grande had been doing, which was, in essence, proclaiming the truth, the Gospel in an unjust land. So, with that background, I would like to share with you two of Archbishop Romero’s comments on the Kingdom of Jesus.

“In our days, the church has been given the responsibility to criticize and analyze the kingdoms of earth and bring people to an awareness that they are still lacking in justice and peace and effectiveness. Only when Christ, the true king announced by God, becomes truly the king of all hearts will the reign that God desires become a reality.”

And, “The church is not on earth to teach the wisdom of the earth; God is in the midst of humanity, building a kingdom of justice and love and peace. And so, sisters and brother, the struggle of the church is precisely to sow more love, to awaken greater hope, toe helps sinners repent of their sins and draw closer to God, and to renew us all interiorly.” (3)

It was 40 years ago that those words were spoken by Archbishop Romero. It was nearly 2000 years ago when Pilate questioned Jesus about being a king. And, now today, we continue to do the work of the kingdom. Each Sunday we pray the words that Jesus taught us, “Thy kingdom come; thy will be done;” God’s kingdom is eternal, in that way it is not of this world. And, God’s kingdom is based in love and mercy, not power and violence, in truth, not in deception; in that way too it is not of this world. But God’s kingdom has come, in Jesus. And, when Jesus is our Lord, his kingdom has come in our lives and in the places we live.

As we begin a new church year, our constant goal is to be people of the truth, and to strive for God’s will to be done through us as we worship God, grow in faith and offer hope. Or, as Bishop Romero said, may we sow more love, awaken greater hope and be renewed. AMEN