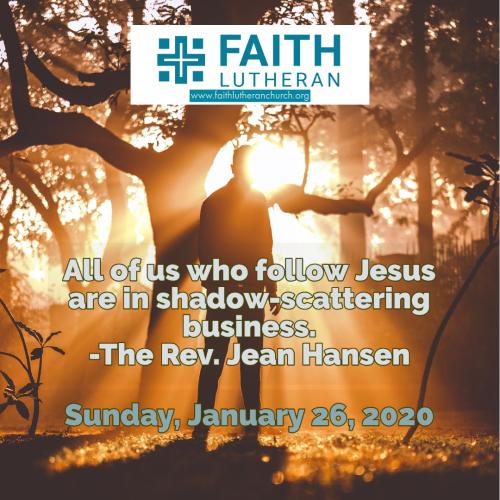 We Scatter the Shadows

Some of you may be confused…not just in general … but by today’s Gospel reading, especially if you were here last Sunday when we read in John’s Gospel how Andrew was called by Jesus to “Come and See” while hanging out with John the Baptist and others on the road. Later, Andrew’s brother Simon Peter followed too, and there was no mention of fishing or the Sea of Galilee.

Then, this week, in Matthew’s Gospel, the same two disciples – Andrew and Simon Peter - are called to become followers of Jesus from their fishing enterprise, along with fishermen James and John. Wait … weren’t they already following him? The explanation may involve multiple encounters with Jesus by Andrew and Peter, and thus, multiple “calls” before the deal was sealed, so to speak. Still, it’s confusing.

Not as confusing, though, as a very similar story was to at least one of our preschoolers when I told it to them this week. In that story, Andrew and Peter had been fishing all night and caught nothing, so Jesus intervened, and they caught so many fish that the net was breaking.

This sounds simple enough, but it required some pre-story explanation about fishing being a job and the use of nets, not poles. Unfortunately, I added that the fish would be taken to the market where people could buy them too cook for their dinner.

At that point, a darling three-year-old sitting in the front pew, with eyes as big a quarters, somberly advised me: “People don’t eat fish.” I mumbled some response, thinking perhaps his best friend is a goldfish named Fred. (Later, Miss Dineen informed me of the Finding Nemo slogan that fish are friends, not food.)

All that was not the end of the confusion, though, since more than one little face peered at me with consternation at the story’s end when Jesus told the fishermen they would now be fishing for people. After all, if fish caught by fishermen are sold in the market for dinner, then…. (God bless all preschool teachers.)

Let’s set our confusion about who was called when by Jesus aside, and consider the situation described into which Jesus called his first disciples. Matthew reports that John the Baptist had been imprisoned by Herod and Jesus, recognizing that this could be a dangerous situation for him too, withdrew to Capernaum, a town of about 1000 people on the northern shore of the Sea of Galilee.

According to commentator Judith Jones, this region had historically belonged to the tribes of Zebulun and Naphtali, but in Jesus’ time truly was “Galilee of the Gentiles,” having been conquered by Rome and ruled by Herod Antipas who was known for his brutality. So, she writes, “Into a context of danger and darkness and death comes Jesus, proclaiming deliverance and light and life.” (1)

People there rely on farming and fishing to survive, and Jesus lives among them, not with the rich and the powerful, but the common people. He picks up ministry where John left off, proclaiming the same message, “Repent, for the kingdom of heaven has come near.” However, Jesus is the embodiment of the message, while John was the forerunner, the one who prepared the way.

Andrew, Simon Peter, James and John are drawn to the light Jesus offers; he calls them to follow, and they do. What about their work as fishermen and their tools of the trade? Did they just abandon it all? Did they not have family commitments? Weren’t there expectations of others to meet? These are the questions we most often ask because we cannot imagine such rejection of all that was familiar and secure.

Of course, we do not know the details of their decision to follow Jesus - how and why it was made. Perhaps the Holy Spirit’s tug was so strong that they did not pause to reflect but went. Or, maybe they did a first-century version of a pro and con list or reached some compromise with heir loved ones or truly struggled to let go. What we do know is that from this point of the story on, they had a lot to learn, to experience, and transformation to face as Jesus’ disciples. They often fail to understand or obey, but they also grow in faith and commitment.

As commentator Audrey West notes, “Those first disciples, for their part, might have preferred to keep their jobs, to remain with their families, to stay with the life that they knew. When they see Jesus and hear his words to them, they make a different choice, however; they take a risk, step out in faith, leave behind that which is comfortable and secure. They choose to follow Jesus. All that is asked of them at this point is simply that they follow: as they are, being who they are. As is true for the followers of Jesus who come after them, the meaning of their choice will unfold only over time.” (2)

“Being a disciple means seeing Jesus as the light of the world that scatters the shadows,” writes Pastor Jennifer Moland-Kovash. (3) That means that all of us who follow Jesus are in shadow-scattering business, dispersing all that creates darkness in our world.

Last Sunday, we gathered with our collaborative partners, New Hope Baptist and St. Hilary Catholic churches, and Temple Israel, for a Martin Luther King Jr. Day celebration. This was our third year of doing so, and yet the coming together of people from various faith communities and backgrounds was moving. There was a shadow scattering feel to it, I think. Whether it was the African Drummers, or the youths’ sharing, or the choir singing, or the movement of the Mime Ministry, the message was that in the midst of darkness, light has dawned.

The clergy shared, as we also did the past two years, portions of a sermon/speech given by Martin Luther King, Jr. Each year I have been overwhelmed by Dr. King’s ability to communicate with power and beauty, and this year was no exception. However, this year I also noted how pertinent his words continue to be, even 55 years after being written.

There is so much WE can offer the world; we can be those who can make it true that the people who have walked in darkness have seen a great light, and for those who sat in the region of darkness and the shadow of death, light has shined. Like Peter and Andrew, like James and John, like Martin Luther King, Jr., we scatter the shadows of our world because we say “yes” to following Jesus. AMEN