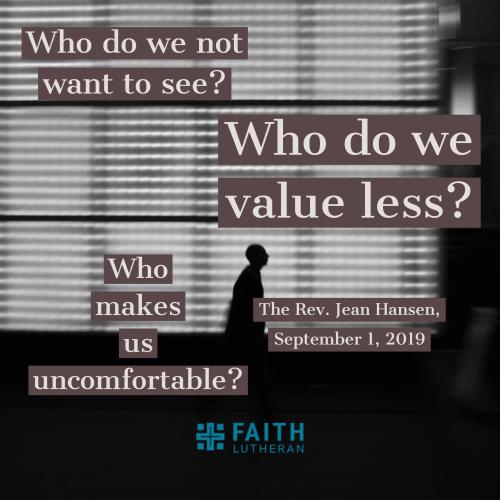 On Who Do We Pull the Shade?

Jesus is at it again; he just keeps saying radical things! What, you might ask, is so radical about today’s reading, especially the first part? It seems rather boring; just some polite advice. But, to Jesus’ first-century hearers, who sat where was a sensitive issue.

The interesting thing is that this is not just a first-century concern. Commentator Debie Thomas recently wrote about her father’s early childhood in India. Her grandparents were devoted members of their church, and it was often the case that elders and preachers showed up at their home for lunch after Sunday services. Cooking rice and curry over a wood stove took time, and the rules of hospitality dictated that “men of God” ate first. So, Debie’s father and his siblings had to wait quite a while to eat on Sundays. Only when the honored guests had had their fill and left would her grandmother gather the leftovers and feed the kids. (The poor woman probably didn’t eat until after the children had done so.)

One Sunday afternoon, Debie’s father, then four-years-old, was especially hungry, and he had been chased out of the kitchen many times. He had had enough; so he marched into the dining room where guests were relishing their second helpings, put his hands on his hips and shouted, “Get out! Hurry up and leave so I can eat!” (1)

Jesus may have liked that story since he tended to upset the norm. Still, to Jesus’ listeners the norms were important, and there would have been few things more humiliating than to have a host ask you to move to a lower position at a social gathering. Given that, wasn’t Jesus just giving good advice when said not to sit in the place of honor, but to sit in a lower position?

That’s what seems to be the case, except for two things. First, Jesus says to sit in the lowest place, which is a location no one would willingly select (perhaps lower, but not lowest). Second, Jesus continues by telling them that, when they’re hosts, not to consider the “reward” of their invitations. In other words, do not invite to dinner those who are in a position to pay back their hospitality, but rather invite the outcast – the poor, the sick, the socially undesirable. Now, that’s radical!

How do you suppose the other diners reacted? We are not told. Perhaps they laughed, or shook their heads in dismay, or argued or ignored his advice. Do you suppose anyone followed it? Do we? The point is, says commentator David Lose, that Jesus’ whole life is centered on inviting into the presence of God those who neither expect nor deserve such an invitation. Jesus tells us to stop counting the costs, benefits, and rewards of our actions and live from a sense of abundance and blessings. What if we were kind to everyone around us, but especially those who are not often the recipients of kindness? (2)

What if? Pastor Janet Hunt, in her blog, tells a story of a woman who regularly came to the church for assistance. She needed gas, or medicine, or had to make an unexpected trip somewhere. Sometimes Pastor Hunt has helped her out of the church’s discretionary fund, sometimes out of her own pocket, and other times she has said “no.” Let me pause in her story to say that this is a familiar scenario, probably for all pastors, and it’s easy to become skeptical about the veracity of the requests and be apathetic, at best.

But Pastor Hunt learned some of her story, and one day took an unusual step in the kindness department by taking her to lunch. Here’s the story in her own words:

“We met at a small diner a few blocks away from the church where too late I realized she might feel out of place for her dark skin stood out among the rest of the crowd at noon. Still, in this place where the server knows what I will order even before I open the menu as I have been there so often, she was treated with kindness.”

“She ordered more than she could eat, packaging up the leftovers for dinner later in the day. We meandered in our conversation some, with her trying to get to know as much about me as I had learned about her over the past several years.”

“It went fine. And yet, there was an awkwardness in our sharing, which I had not discerned in our previous conversations. Yes, this was my ‘turf’ if you will. And I was clearly ‘in charge’ for I was picking up the tab. And yet something happens when we sit across the table from one another. In this case, the ‘playing field’ was leveled some, and she felt freer to ask questions if nothing else. And there is this. Ever since she has been trying to find time to invite me to her home to fix a meal for me.” (3)

Could this be the beginning of a friendship or at least a friendly acquaintanceship? Isn’t this what needs to happen if that which separates people is to be broken down, so that understanding and acceptance begin? It seems to me that’s the very reason Jesus says to invite to a MEAL those with whom we would not usually interact; it’s not only to provide food but to sit down and eat together and interact with one another. And, that requires true humility.

We are called to humility, not arrogance; generosity, not stinginess; and hospitality, not fear. Or, as the reading from Hebrews proclaims, “Do not neglect to do good and share what you have, for such sacrifices are pleasing to God.”

“There’s one more story I want to tell you today, and a few more questions I want to pose. Author and pastor Tony Campolo tells a story of an experience at dinner in Port-au-Prince, Haiti. He was checking on mission programs that his organization carries out, wanting to see how the workers were surviving emotionally and spiritually. At the end of a long day, he was tired and ‘peopled out,’ so it was a great relief to sit down for a good dinner at a French restaurant in the heart of the city. He was seated next to a window so that he could enjoy watching the activity in the street outside.”

“The waiter brought a delicious looking meal and set it in front of him. Tony picked up his knife and fork and was about to dive in when he happened to look to his right. There, with their noses pressed flat against the window, staring at his food, were four children from the streets. They pressed their faces right up against the glass; they were staring at his plate of food. The waiter, seeing his discomfort, quickly moved in and pulled down the window share, shutting out the disturbing sight of the hungry children. The waiter then said to Tony, ‘Don’t let them bother you. Enjoy your meal’” (4)

I don’t know the rest of the story, but I think it would have been difficult to enjoy that meal; I certainly do not want to get into a discussion about the ethics of such a situation. What I want to focus on is the metaphor of the shade being pulled and think about those we pull down the shades on. Who do we not want to see? Who do we value less? Who makes us uncomfortable? Those are the very people, Jesus says, who we should include at “the banquet,” whether that’s the Communion table or at DLM. And, it’s not just about meeting needs, it’s about being open to relationships, one-on-one human interaction, and acceptance. While people are inclined to pull the shades down on some of God’s children, God does not. In fact, Jesus is encouraging us to push up the shades, so that blessings may abound in all of our lives. AMEN